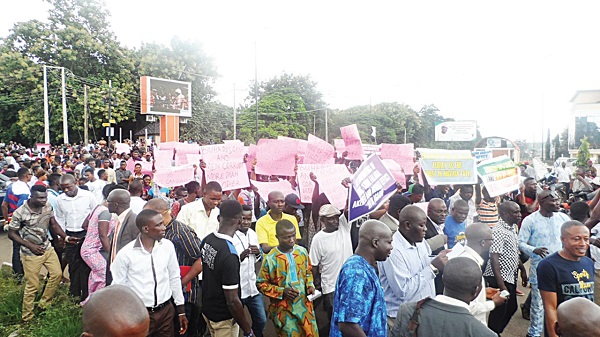 The 2,000 workers who were recently sacked by the Ekiti State Goverenor, Kayode Fayemi, on Friday staged a peaceful protest in Ado Ekiti, the state capital, over the recent cancellation of their recruitment.

The Governor had on Thursday cancelled their appointments. According to him, the 2000 people were fake workers that were erroneously employed by former governor Ayodele Fayose, arguing that they could not have been sacked because they never actually employed.

In protest, the workers alongside some of their dependents, stormed major streets of Ado Ekiti, claiming they were innocent of the alleged irregularities in their recruitment exercise seven month ago.

They appealed to the governor to reconsider their case. They also stormed the state Teaching Service Commission (TESCOM) located within the State Secretariat complex with their original letters of appointment.

Spokesman for the protesters, Olawole Ganiyu, insisted that their appointments were in line with the civil service rule.

He said: “During the Fayose-led government, we were at home when vacancies were advertised ” Out of nothing. we paid N1,000 to buy forms. We wrote examinations and later sat for an interview. Scores of the examination results were also posted at the various ministries.

“Later, those shortlisted as qualified again sat for separate interview and letters of appointment and posting issued out to successful applicants.

“What was in our letters is that we are to work for three months before getting salaries, but we have not been paid a dime since eight months ago.

“Government should please be compassionate with us. We were born and brought up here in Ekiti as indigenes, most of our long-time graduates in search of gainful employment.

“Most of us even, out of the desperation to get pensionable jobs, resigned from private jobs to partake in the recruitment while many others had to relocate to our places of posting without a single kobo of mobilisation since about eight months ago that we were engaged, and has been working very hard to justify our appointments,” he said.

Meanwhile Gov. Fayemi sack had said, “The so called ‘recruitments’ carried out were obviously mischievous because it neither followed due process nor was it ever completed.

“For instance, the affected persons were not duly captured in the Civil Service Structure. Apart from a letter of employment purportedly given them, they do not exist in the state civil service nominal pay roll.

“Besides, they were never captured in the state’s Biometric Payment System and never received any salary since the purported ‘appointments’ in October 2018.

“You can imagine 2,000 applicants who did not know the offices or jobs they were being employed for. An application form that did not indicate the position each applicant was vying for.