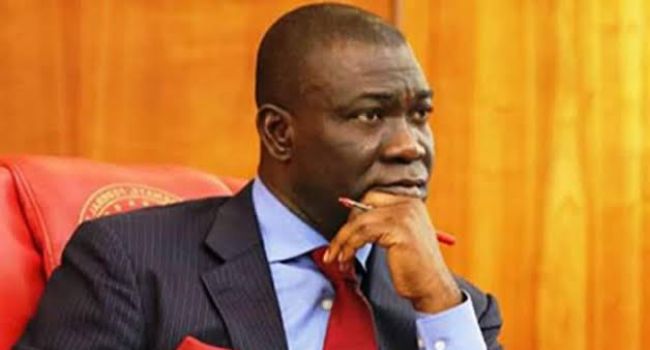 The Nigerian Immigration Service (NIS) has narrated the part it played over the matter of David Ukpo Nwamina, the young lad involved in the alleged organ harvesting saga involving a former Deputy Senate President, Ike Ekweremadu.

He was said to have been penciled to donate a kidney for the politician’s ailing daughter, which has turned into a scandal leading to the arrest of the Senator and his wife, Beatrice, by the London Metropolitan Police last week.

The couple was arraigned at the Uxbridge Magistrate Court in London on charges of conspiracy and organ harvest on Thursday and are now in custody awaiting trial on July 7.

In a statement issued by the NIS on Sunday following the ‘organ harvesting’ scandal rocking Ekweremadu and his family with regards to the age of Ukpo, the service claimed he is actually 21 years of age instead of the 15 being bandied about.

In the NIS statement signed by the Comptroller General Isah Jere, the Service denied complicity in issuing a fake passport to Ukpo, claiming that he is not underaged as being circulated.

“The Service wishes to set the record straight by informing the general public that the views being expressed that the service did not properly vet the breeder documents issued by the applicant during his passport application process are not correct, but mere fabrications aimed at tarnishing the image of the Service,” the statement reads.

“The facts of the matter concerning the case above, therefore, are that the said Mr David Ukpo Nwamina applied and paid for the Enhanced e-passport using the NIS portal after which he approached the Gwagwalada Passport Office, FCT Abuja, on November 2, 2021, for his interview.

“To support his application, Mr Nwamina presented all the necessary documents required, including his birth certificate issued by National Population Commission, showing October 12, 2000, as his date of birth; his National Identity Number, issued by NIMC corroborating the date of birth; a certificate of origin issued by Ebonyi State Government Liaison Office Abuja, and a Guarantor’s form duly signed.

“In view of the above, the general public may wish to be informed that the date of birth, or any other information, on any Nigerian passport is printed on the document only after a thorough vetting process that involves both the applicant’s breeder documents and the person. Mr Nwamina’s case, therefore, was not an exception.”

Related Topics:EkweremaduNISorgan harvest
Up Next

2023: Ex-lawmaker, Jibrin explains why Kwankwaso will not be running mate to Obi