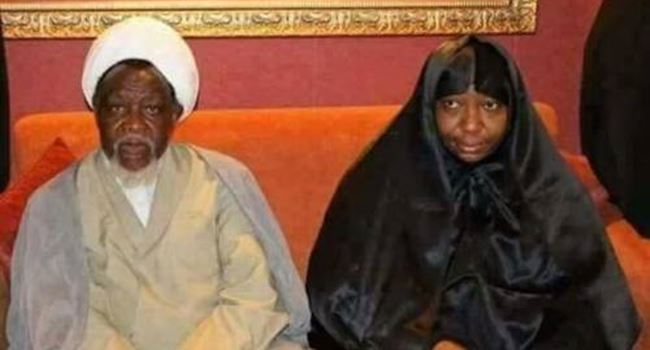 The family of Ibraheem El-Zakzakky, the detained leader of the Islamic Movement in Nigeria (IMN), popularly known as Shiites, has revealed that his wife, Zeenat, has contracted the COVID-19 virus while in detention at the Kaduna Prison.

The duo have been in detention since 2015 after being charged with culpable homicide and other sundry offences following a clash between his protesting members and operatives of the Nigerian Army who waylayed the convoy of Chief of Army Staff, Lt. Gen. Tukur Buratai, leading to the killings of hundreds of the protesters.

Making the revelation in a press statement on Thursday, one of the sons of the IMN leader, Mohammad, said his mother is yet to be evacuated despite informing authorities about her status, an act he described as an “assassination tool.”

In the statement, Mohammad said:

“Six days ago, after a routine visit to the Kaduna State prison by my parents’ doctors, my mother complained of fatigue, fever and a complete loss of the ability to smell.

“The doctors decided to carry out a number of standard tests in order to understand what the problem was. Among the tests that were carried out was a test for the novel coronavirus.

Read also: Iran urges Nigeria to release and send El-Zakzaky over for treatment

“This was a routine procedure and it is important to state that she has been denied treatment for acute medical conditions, including severe arthritis of the knee for years now.

“Meanwhile, the COVID-19 test came back positive. I imagined that due to the diligent way in which the prison management had been conducting and managing the facility, a COVID-19 outbreak would be extremely unlikely.

“But once I heard of the test result, my first action was to ensure that it was tried, tested and confirmed.

“I expected that following our risky entrance into the predictable ‘petri dish’ of Kaduna State prison for what it is, the person in charge of Kaduna State prison would officially do his job and inform the State Governor, Nasir El-Rufai, and the chain of command that the current campaign of torture, extortion, corruption and murder has come to this and my mother, Zeenah Ibraheem El-Zakzaky, needs to be immediately hospitalized.

“My mother is still in Kaduna prison at the moment, yet to be hospitalized and to receive proper health care.”