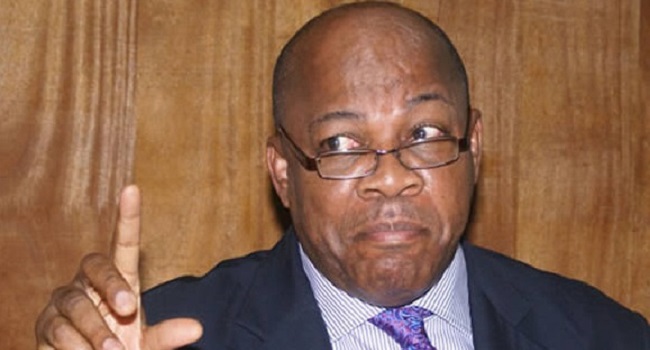 A former president of the Nigeria Bar Association (NBA) Olisa Agbakoba has called on presidential candidate of the Peoples Democratic Party (PDP) Atiku Abubakar not to approach the Election Petition Tribunal to contest the results of the presidential election held last Saturday.

He counseled Atiku to not “lose sight of the legacy and greatness that lies in front of him”, adding, that the Adamawa born politician “is in a strong position to take up the mantle of a statesman”.

Atiku, in the final results declared by the Independent National Electoral Commission (INEC) lost to the incumbent president and candidate of the All Progressives Congress (APC) Muhammadu Buhari.

Responding to the subsequent developments wherein Atiku refused to accept the results and vowed to approach the courts, Agbakoba In a statement on Wednesday by Niyi Odunmorayo,
his Media Assistant, said “the voting pattern for the 2019 Presidential Election shows ethnicity played a significant role in the Election.

“President MuhammaduBuhari kept his base in the North while former Vice President, Atiku Abubakar largely held his base in the South. Both All Progressive Congress (APC) and Peoples Democratic Party (PDP) benefited from primordial voting. The excepted zone is the South-west where voting occurred on the basis of issues.

“The significance and consequence of the 2019 Presidential Election is huge unless we are able to reverse it. 2023 will follow the pattern of 2019 unless we do something about it. I understand the PDP is aggrieved about the outcome of the Election and alleged massive irregularities. But I urge former Vice President, Atiku Abubakar not to approach the Election Petition Tribunal.

“He might have moved backwards by his loss but he should not lose sight of the legacy and greatness that lies in front of him.Former Vice President, Atiku Abubakar is in a strong position to take up the mantle of a statesman. He can build a new Nigeria movement from the motley of small parties, third force actors, change actors and millions who are desperate for a strong, united Nigeria. There is also a lot of work to be done in both political and electoral reforms. I request former Vice President, Atiku Abubakar to step into the shoes.

“This is not to say I do not recognize the massive irregularities in the 2019 Presidential Election. I can see how tempting it is to take the option of the Election Petition Tribunal but that in my view is not the right decision. We look forward to a new Nigeria, strong and united; a new Nigeria that will not vote on the basis of ethnic and primordial sentiments.

“As I said, I was shocked at the strength of the two parties in holding their respective bases. But the problem was that the basis was simply primordial and not driven by issues. Nigerian politics must appeal to issues and not ethnic or primordial consideration. This is the biggest danger in the 2019 Presidential Election and we as Nigerians must stand up to redress it”.