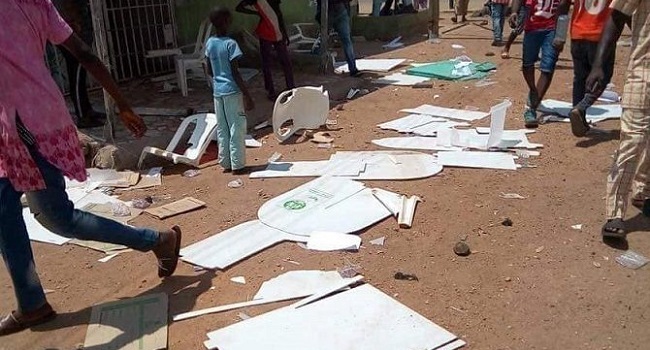 The Socio-Economic Rights and Accountability Project (SERAP) has asked the International Criminal Court (ICC) to probe officials of the All Progressives Congress (APC) and the Peoples Democratic Party (PDP) over violence recorded during last Saturday governorship election in Kogi and Bayelsa States.

The elections were reportedly marred by widespread violence, killings, and other irregularities.

In its response to the development, SERAP in a petition dated 16 November, 2019 and sent to the ICC Prosecutor, Mrs. Fatou Bensouda, asked the international court to “investigate whether the persistent crimes of corruption, violence, and killings during elections in Nigeria, most recently in Bayelsa and Kogi States, and the repeated failure of the Nigerian authorities to address the crimes amount to violence against Nigerians and crimes against humanity within the jurisdiction of the ICC.”

The organization urged Ms. Bensouda “to push for those suspected to be responsible for these crimes, mostly security officials, officials of the two main political parties, the All Progressives Congress (APC) and the Peoples Democratic Party (PDP), and other actors who contributed to the corruption, violence and killings during the elections in Bayelsa and Kogi States, and are therefore complicit in the crimes, to be tried by the ICC.”

Read also: GROUP TO INEC: Reject results from areas where elections did not hold

In the petition signed by SERAP Deputy Director Kolawole Oluwadare, the organization said: “The events in the Bayelsa and Kogi elections suggested criminal conduct within the jurisdiction of the ICC. If the results of the preliminary investigation suggest that further investigation is warranted, the ICC should work with Nigerian anti-corruption agencies on the matter. Election-related corruption and violence are not just minor infractions, they suggest serious crimes against Nigerians, in particular, crimes against humanity.”

“In the ICC case on Kenyan election violence, the culture of impunity was considered one reason why violence had been ‘normalised’ as a means of political struggle. We, therefore, urge you to investigate allegations of corruption, violence and killings in Bayelsa and Kogi elections, if the ICC is to contribute to preventing escalations in future elections, including the general elections scheduled to hold in 2023.”