ELECTIONS: We have 'facts' that Int'l observers don't, we must go to court- Secondus | Ripples Nigeria 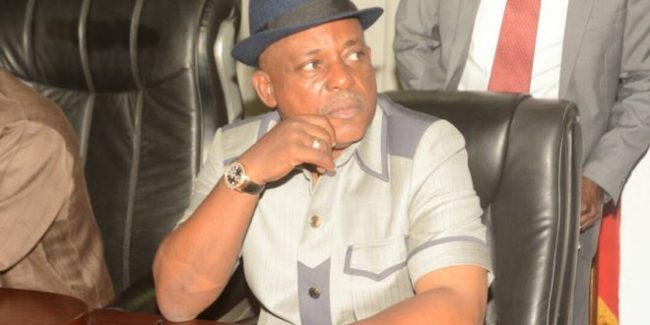 The National Chairman of the Peoples Democratic Party (PDP), Prince Uche Secondus, has vowed that the opposition party will approach the courts to contest the outcome of the February 23 presidential election, saying nobody can stop the party.

The PDP chairman stated this at a press conference he addressed in Abuja on Friday, adding that the party believed that justice would be done at the court.

“We will go to court. Nobody will stop us from going to court and bring out all of the facts both the international observers and some people have not seen.

“Because, if we continue to suppress injustice and go sentimental, the country will continue to pile on gun powder that will explode one day.

“So much injustice has been done in this country and if we allow it and it continues to pile, nobody knows what will happen.

“So, that’s why we decided as good citizens and law-abiding and people who believe in rule of law that we will go,” Secondus said.

On the meeting the party and its presidential candidate, Atiku Abubakar had with members of the National Peace Committee, NPC, Secondus said there was no condition given to the party, as they were only invited to state their grievances.

“There was no condition. Initially, we were not to talk with them because a decision had been taken to go to court, but because of the personalities involved, we said ok, let’s just talk.

On the alleged militarisation of the elections particularly in the South-South and South East, Secondus said it was one of the strategies the ruling party used in denying PDP victory.

According to him, the development was also responsible for the alleged killing of innocent electorate and suppression of voters who were either scared out or chased away from polling units. This, he insisted was responsible for the low turn out of voters on election day, the Independent National Electoral Commission, INEC, own record voter turnout record in the election fell to about 36 per cent from 44 per cent it was in 2015.

“While the military was suppressing voters in PDP stronghold areas in the South, different abracadabra was going on in some northern states particularly in Kano, Yobe, Borno and Zamfara states where numbers refuse to add up.

“In Borno, Yobe and Zamfara states, a confirmed report shows that there was non-compliance in the use of Smart card reader as approved by INEC rules.

“The same applies to cancelled votes, in Nasarawa states over 115,000votes cancelled, Kogi 79,000 votes, Plateau 30,000 votes indicating that these high incidences of vote cancellation were designed to suppress the margin of victory in PDP strongholds.”

The PDP chairman however called on members and supporters of the party across the country not to despair but to remain steadfast and focused.

“Like our presidential candidate assured, we shall triumph at the end because democracy has come to stay in this country and is staying by the grace of God.

“I also wish to reiterate to our security agencies particularly the Army that they are not at war with any section of her citizens and they must try to be professional in their duties by staying away from election matters as directed by the Supreme Court of the land”, he said.