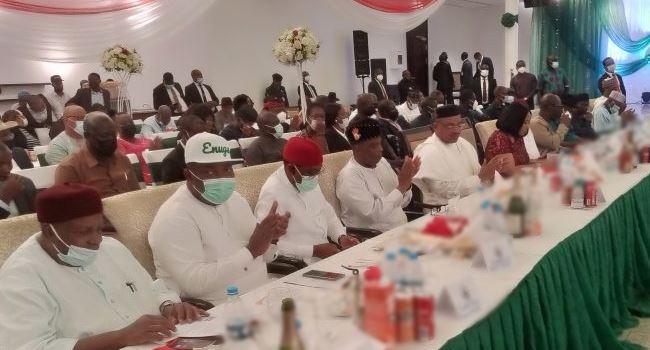 The governors made the call in a 10-point communiqué issued at the end of their meeting in Bauchi and signed by the Chairman of the PDP Governors’ Forum, Aminu Tambuwal.

The states’ chief executives condemned the attempt to foist on all political parties one method of conducting primary elections – the direct system through the Electoral Act Amendment Bill.

The communiqué read: “On the Electoral Act Amendment Bill, the governors identified with the need for free, fair, and credible elections in the country and called on the National Assembly to entrench electronic transmission of results of elections in the nation’s electoral jurisprudence.

The governors also appealed to the Federal Government to collaborate with the state governments to stem the raging unemployment affecting the youths through technology and increased production in all fields of human endeavour.

It added: “Government should stop paying lip service on the Ease-of-Doing Business as foreign direct investments have continued to fall partly due to obstacles placed on foreign companies wishing to invest in Nigeria.

“A classical example is that of FACEBOOK which indicated interest to invest in Nigeria but is being frustrated by regulatory agencies.”

They challenged the federal government to bring the activities of bandits, kidnappers, and Boko Haram terrorists to an end through increased use of military equipment, traditional means of conflict resolution and technology of surveillance.

They urged Nigerians to take advantage of the ongoing Voter Registration exercise by INEC to prepare themselves with the necessary tools in the struggle to ensure free and fair electoral process in the country.

“Furthermore, the general public, especially our youths and women are implored to use the opportunity of the PDP e-Registration exercise which will kick off soon, to register as PDP members, while PDP members should update their membership electronically,” the communiqué stated.