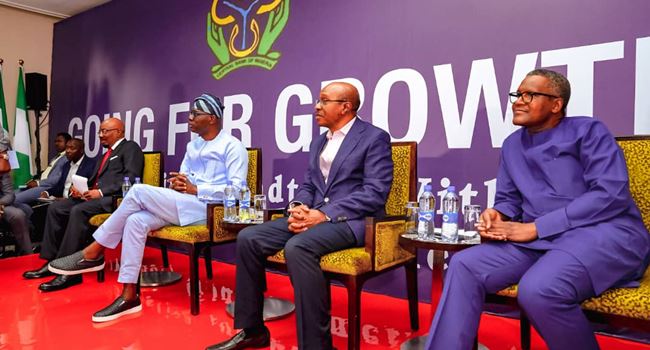 The Central Bank of Nigeria (CBN) has lamented the economic backwardness faced by the nation despite its brilliant policies.

The bank highlighted smuggling and dumping of banned products into the country as factors sabotaging the country’s economic policies.

The governor of the apex bank, Governor, Godwin Emefiele made these notes at a consultative round table, titled: ‘Growing for growth’, in Lagos on Saturday.

The round table discussion was part of the engagement that was planned, preparatory to the CBN releasing another five year vision and agenda for the next tenure of the Governor of CBN.

Emefiele added that “we have identified smugglers and dumpers as those who sabotage these policies and we have decided we will deal with them and the strategy we came up with is that we will not bother ourselves.

“There is an agency of the government that is responsible for border control but that if these people pass through this border control, we would use the instrumentality of being the regulator for the banking system, to make sure that we get the banks to provide all details about these smugglers and dumpers, to provide investigation and if they are found culpable in economic sabotage bordering on dumping and smuggling in Nigeria.

Aliko Dangote, Founder and Chairman of Dangote Group, said for Nigeria to witness economic growth, government should partner with the organised private sector, sort out the electricity issue, banks should give easy access to consumer credit, increase house mortgages, increase focus on agriculture and manufacturing sectors.

He said: “Government needs to have partnership with the private companies to access growth. It needs to encourage private sector investors, so that they do not rely on oil to pay salaries. That of oil should go into implementation for perfection of the economy. We the local investors should drive this country.

“Also another issue is smuggling. There is no country that can survive near the Republic of Benin because their main job s facilitating smuggling.”

Also speaking, Atedo Peterside, Founder, Stanbic IBTC Bank, listed high tax rates, among others, as harmful to the growth of young start ups, exchange rate instability, and high inflationary rate, among others, as bottlenecks impeding growth in the economy.

SEC insists due process was followed in sacking Oando officials