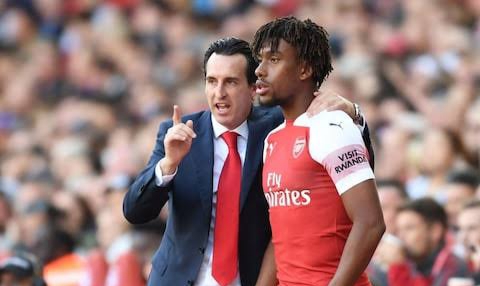 Iwobi, 22, has featured regularly under Emery’s leadership as against fears in some quarters that the winger might get lesser playing time following the exit of Arsene Wenger.

Speaking to UK newspaper, Independent, the manager revealed that Arsenal players prefer to have Iwobi on the pitch.

“When I ask Nacho Monreal and Sead Kolasinac who is the player who you feel better on the pitch when he is playing, they say to us: Iwobi,” Emery said.

“It is because Iwobi can open space on the overlap for them. So I think Iwobi is giving a lot for us.

“We want to play and we want to create our philosophy and I think for that Iwobi is important.

“But he needs to carry on improving and he knows that the situation can still improve,” he added.

The Gunners thrashed Bournemouth 5-1 at the Emirates stadium on Wednesday night, with Iwobi playing a sub role.

The talented winger has scored three goals and recorded six assists in 25 League appearances for Arsenal this season.