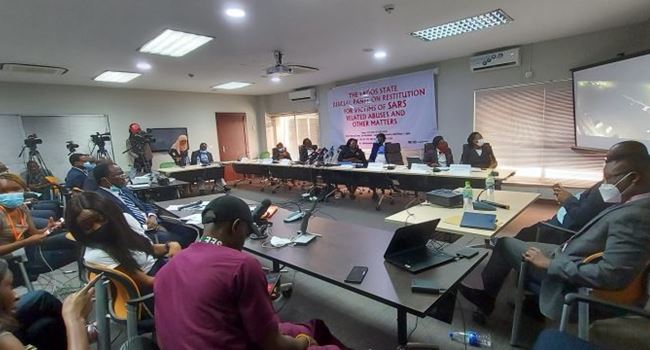 The Lagos State Judicial Panel of Inquiry investigating the #EndSARS protests on Monday advocated the dismissal of soldiers complicit in the murder of innocent protesters on October 20, 2020, at the Lekki Toll Gate.

Ripples Nigeria had reported that the Nigerian Army had continuously denied involvement in the incident despite several accounts of witnesses, including hospitals where victims were taken to, showing that there were casualties.

The Lagos State Judicial Panel of Inquiry set up to probe the incident submitted the reports on the Lekki shooting incident and police brutality cases to the state government on Monday.

The panel led by a retired judge, Doris Okuwobi, submitted the reports at the Governor’s Office in Alausa, Ikeja.

The panel concluded its sitting on October 18, 2021, and said its findings and recommendations would be submitted to the state government.

In the report sighted by Ripples Nigeria, the panel recommended disciplinary actions for Lt. Col S.O. Bello and Major General Godwin Umelo for failing to honor its summons in order to frustrate the investigation.

It added that all men of the Nigerian Army that were deployed to the Lekki Toll Gate on October 20, 2020, should be made to face appropriate disciplinary action, stripped of their status, and dismissed.

“The panel recommends disciplinary actions to the following officers (Lt. Col S.O. Bello and Major General Godwin Umelo), who refused to honor the summons of the panel in order to frustrate the investigation,” part of the recommendation read.

“All officers (excluding Major General Omata) and men of the Nigerian Army that were deployed to the Lekki Toll Gate on October 20, 2020 should be made to face appropriate disciplinary action, stripped of their status, and dismissed as they are not fit and proper to serve in any public or security service of the nation.

“The panel recommends that all those arrested in the course of the protest should be granted bail, prosecuted for any offence that may be alleged against them or where no prima facie evidence of culpability is disclosed upon due investigation, they should be released forthwith.

“The panel recommends that the Nigeria Army be discouraged in intervening in internal security.

“The Panel recommends that the commitment made to the hospitals by the Lagos State Government through the Governor and the Commissioner for Health for the payment of the hospital bills of the EndSARS protesters should be fulfilled,” an excerpt from the report read.