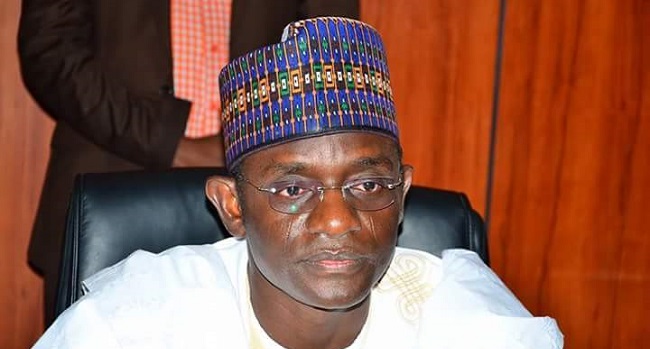 The Governor of Yobe State, Mai Mala Buni has declared that those behind the #EndSARS protests which has spread across the country and has since gone global have a hidden agenda.

Governor Buni who also doubles as the All Progressive Congress (APC) Acting National Chairman, made the remark during an interview on BBC Hausa Service on Monday morning while also warning that the ongoing protest may lead to anarchy.

According to him, hoodlums are using the ongoing protest against police brutality to terrorize innocent Nigerians going about their daily business.

He said; “Hoodlums can utilize the gathering to cause confusion and terrorize other innocent citizens.

“The ongoing protests show that there is hidden agenda, after the government has responded to the protesters’ demand.

“Nigeria is a country accommodating people with several motives and demands which include restructuring and disintegration, thus, we should be careful,” Governor Buni stated.

This came after a group within APC Yobe State chapter called on the State House of Assembly to impeach Governor Buni if he fails to resign over alleged absence as governor of the state.

The call was made in a statement issued on Sunday by the Chairman, Yobe APC Stakeholders, Hussain Muhammad, at the end of their meeting in Abuja, premising their demand on the governor’s alleged “unavailability in the state to discharge his constitutional duties as governor of Yobe State.”

They said Buni “has abandoned the state completely and only visits once in a month.”

The group in the statement said that it has become expedient to draw the attention of the public, especially the state House of Assembly, to the aberration of having a governor “who is non-functional.”

Related Topics:#EndSARSMai Mala Buni
Up Next

I was pressured by prominent Nigerians to stand as Maina’s surety, Sen Ndume tells court