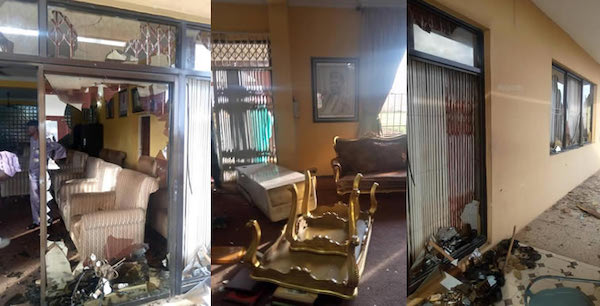 The palace of Soun of Ogbomoso, Oba Oladunni Oyewumi, was attacked on Sunday as #ENDSARS protests continued in the area.

The monarch was holding a meeting with the Minister of Youth and Sports Development, Sunday Dare, when the youths stormed the palace.

However, policemen and operatives of the Department of State Services (DSS) who were also at the palace at the time of the incident, ferried the minister, the monarch, and other chiefs to a safe place.

Dare, who confirmed the attack on his Twitter handle, said the properties in the palace were destroyed.

He wrote: “Ogbomoso- Hoodlums, thugs, and miscreants disrupt stakeholders’ meeting in Soun’s palace now -invading, stoning and breaking doors, glasses. Soun, myself and council chiefs were scurried into safety by the police and Department of State Services.

“The hoodlums broke into the palace and destroyed chairs, overturned tables and broke windows. These were not youth or students. These were miscreants and thugs who saw a window of opportunity in the protest which (was) since abated. Thankfully, Soun, the chiefs and leaders of Parapo are safe.”