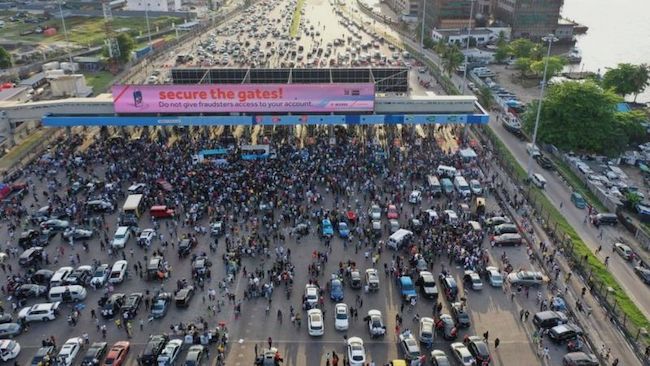 A forensic firm engaged by the Lagos State government to investigate the alleged shooting of #ENDSARS protesters at the Lekki Toll Plaza in October last year, Sentinel Limited has dismissed reports on its indictment of the Nigerian Army on the incident.

The company’s representative, Joseph Funsho, had on Friday told the Lagos Judicial Panel of Inquiry probing alleged brutality by operatives of the disbanded Special Anti-Robbery Squad (SARS) said bullets fired at the scene of the incident were discovered to have been registered by the Nigerian Army.

He said: “The live ammunition presented by the Nigerian Army is of the same calibre as the cartridge casing submitted by the judicial panel.”

He, however, said the blank bullets did not match the records from the army’s inventory.

But in a statement issued on Sunday, Sentinel Forensic Limited dismissed reports on its indictment of the army on the shooting incident as false.

A group of soldiers had on the night of October 20, 2020, opened fire on harmless #ENDSARS protesters at the Lekki area of the state.

The incident sparked angry reactions from Nigerians and the international community.

The statement read: “Öur attention has been drawn to news making rounds on the internet and social media platforms which suggest that our findings implicate and indict the Nigerian Army in the shooting of peaceful protesters at the Lekki toll plaza on October 20, 2020. This biased and unbalanced reporting is false and fake news.

“Our forensic specialist commented that following an extensive scene investigation at the Lekki Toll Plaza by our team of specialist about 87 days after the incidence there was an absence of any physical evidence supporting the allegations of discharge of live ammunition by Nigerian Army personnel. This scene investigation was conducted days after Sentinel Forensics Ltd was engaged by the Judicial Panel of inquiry.

“With respect to the ballistic evidence presented to Sentinel Forensics Limited for forensic examination by the Judicial Panel our specialist indicated that two cartridge casings (from expended/fired) of 7 62 x 39mm ammunition was tendered by the Judicial Panel as evidence recovered at the scene, while one unit of live (unexpended/not fired) ammunition and one unit of cartridge case {expended/fired round) 7.62 x 33mm ammunition was tendered by the Nigerian Army.

“Our specialist testified in accordance with the standard operating protocol in forensics and crime scene investigation which relies on the analysis of physical evidence backed by empirical scientific procedures to draw objective conclusions and inferences and not hearsay or sensationalism.

“In line with best practice and principles of fairness in adjudication parties are considered innocent until proven guilty and the role of an expert witness is never to ascribe innocence or guilt but to support the courts in its finding.

“We strongly advise all new outlets to desist from sensational reporting and reach out to us via our widely circulated contact address on any matter where they require our direct comments.”

Surrender now while you still have time, Army warns insurgents