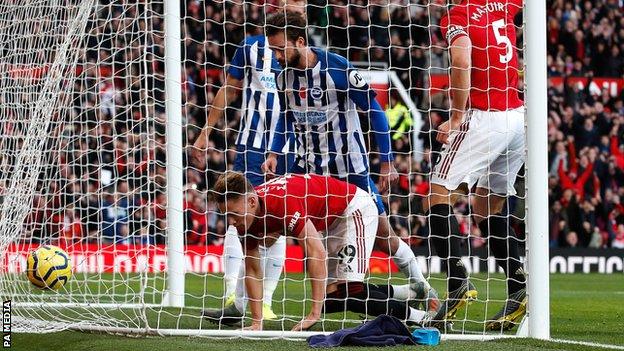 Manchester United moved up to seventh in the Premier League after defeating Brighton at Old Trafford on Sunday.

Super Eagles defender, Leon Balogun was an unused substitute for Brighton, who fell to a 3-1 defeat.

Andreas Pereira opened the scoring for United with a shot that took a big deflection off Brighton’s Dale Stephens.

The Red Devils’ lead was doubled by a Davy Propper own goal two minutes later.

Brighton tried to fight back when Lewis Dunk’s header reduced United’s advantage after half-time, but it was quickly restored by Marcus Rashford.

In the other Premier League game played concurrently, Wolverhampton Wanderers moved into the top half of the table for the first time since the opening weekend, as they beat Aston Villa in the West Midlands derby.

The result sees Nuno Espirito Santo’s side climb from 15th up to eighth, while Villa remain 17th, three points above the bottom three.