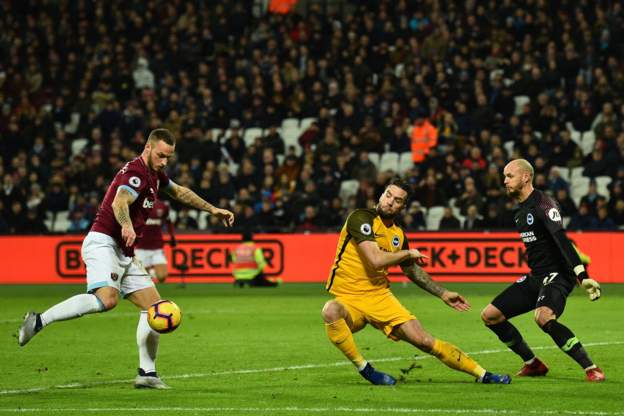 Super Eagles defender, Leon Balogun was an unused substitute for Brighton who battled West Ham to a 2-2 draw in their Premier League clash on Wednesday.

After a goalless first half, Brighton scored two in two second-half minutes thanks to Dale Stephens and Shane Duffy.

But Marko Arnautovic scored twice in two minutes to help hosts West Ham come back from 2-0 down to earn a point.

At Stamford Bridge, Chelsea were held to a goalless draw by Southampton.

It was a first clean sheet in 11 Premier League games for the Saints.

Read Also: Rafael Nadal injured, but hopes to be fit for Australian Open

The Blues, fourth in the Premier League, had more than 70% possession but could not break down their visitors.

After a frustrating first half, the Red Devils got ahead through substitute Romelu Lukaku’s first touch before Marcus Rashford sealed the win.

For interim boss Ole Solskjaer, it is four wins in four games in charge.

Burnley earned a crucial win over 10-man Huddersfield to move out of the Premier League relegation zone and condemn the Terriers to a record eighth consecutive league defeat.

And while Wolves were beaten 0-2 by Crystal Palace, Watford and Bournemouth played draw in a six-goal thriller.

Related Topics:BrightonChelseaManchester United
Up Next

Rafael Nadal injured, but hopes to be fit for Australian Open