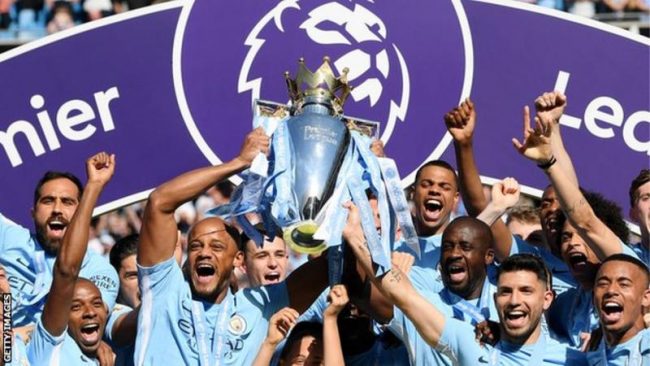 English Premier League champions, Manchester City celebrated their victory by lifting the trophy at the Etihad Stadium on Sunday after they were held to a goalless draw by Huddersfield Town.

The visitors dominated the game but could not find a goal. City’s David Silva, Raheem Sterling and Kevin de Bruyne all came close to scoring but didn’t succeed.

But the Pep Guardiola side have already been confirmed Premier League champions on April 15 after second-placed Manchester United lost 1-0 to relegation-bound West Brom.

Amid jubilant scenes at the Etihad, the champions lifted their trophy having walked out to a guard of honour as thousands of blue and white flags fluttered in the stands.

However, City still eye setting three new Premier League records which have all been delayed by Sunday’s result.

They have scored 102 goals and are one short of surpassing the Premier League best set by Chelsea in the 2009/2010 season.

They currently stand with 94 points, needing two points to break Chelsea’s point tally of 95 set in the 2004/2005 season.

The champions will now face Brighton in midweek with the hope of breaking these records and also become the team with the most number of wins in a season, having already matched Chelsea’s 30 set last season.

City are now three-time Premier League winners – a feat they are achieving in seven seasons.