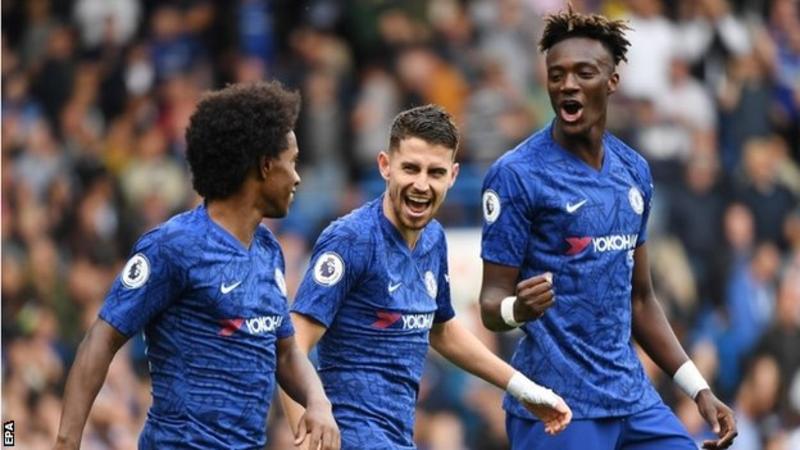 The English Premier League this weekend saw Chelsea and Tottenham clinch victories at home while champions Manchester City were held to a draw.

Chelsea defeated Brighton 2-0 at Stamford Bridge, with Jorginho scoring from the spot early in the second half and Willian sealing victory on 76th minute.

The Blues deservedly won to make it nine wins out of nine league games against Brighton – an all-time Premier League/Football League record.

Elsewhere, Spurs fought hard to beat Southampton 2-1, ending a bad week that saw them lose to Leicester in the league and beaten by League Two Colchester in the Carabao Cup.

Tanguy Ndombele put the hosts ahead before Serge Aurier, who had already been booked, was sent off in the 32nd minute for a foul.

Danny Ings then levelled with a back pass after a howler by Spurs keeper, Hugo Lloris on 39 minutes, but Harry Kane secured win for his side just before half time.

Other games that played concurrently were Aston Villa against Burnley, which ended 2-2; Bournemouth against West, 2-2; Crystal Palace vs Norwich City, 2-0; and Wolves against Watford, 2-0.

Super Eagles forward, Alex Iwobi was subbed in on 7 minutes after Theo Walcott was injured by a ball in the face.

Gabriel Jesus opened the scoring in the 24th minute before Calvert-Lewin drew level in the 33rd minute.

Riyad Mahrez restored City’s lead in the 71st minute and Raheem Sterling sealed victory after his goal was upheld by goal-line technology five minutes to time.