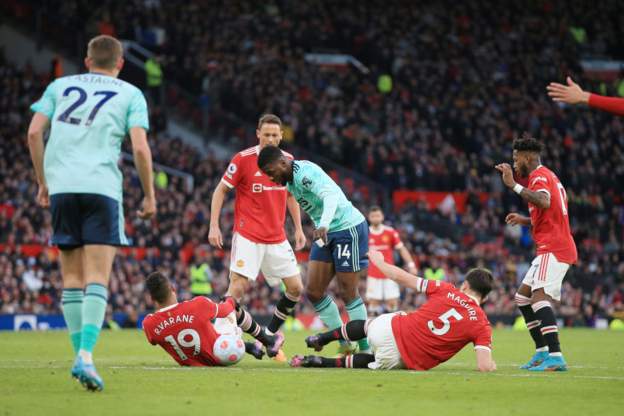 Super Eagles forward, Kelechi Iheanacho was on target for Leicester City in their 1-1 draw with Manchester United in the Premier League on Saturday.

The game played at Old Trafford saw the Nigeria international open scoring in the 63rd minute before Fred equalized for the hosts three minutes after.

The Foxes thought they had retaken the lead late on but James Maddison’s effort was disallowed after VAR review that showed Iheanacho clearly hooking the leg of United defender Raphael Varane in the build-up.

The Red Devils were without Cristiano Ronaldo and barely threatened as the result leaves them three points off the top four, with Arsenal having two games in hand on them.

Earlier on Saturday, Chelsea fell 4-1 at home to Brentford in an encounter that came as shock to Stamford Bridge fans.

The visitors outclassed Thomas Tuchel side as they produced a magnificent display to record their first win over Chelsea since 1939, with Christian Eriksen scoring his first goal for the club.

Elsewhere, Manchester City returned to the top of the Premier League after easing past Burnley 2-0.

Earlier in the day, Liverpool had climbed top with a win over Watford but Pep Guardiola side returned top, leading with just one point ahead of their closest rivals.

In other Premier League games at the weekend, Brighton played a goalless draw with Norwich, Leeds played a 1-1 draw with Southampton while Wolves defeated Aston Villa 2-1.

Liverpool go top of Premier League with win over Watford