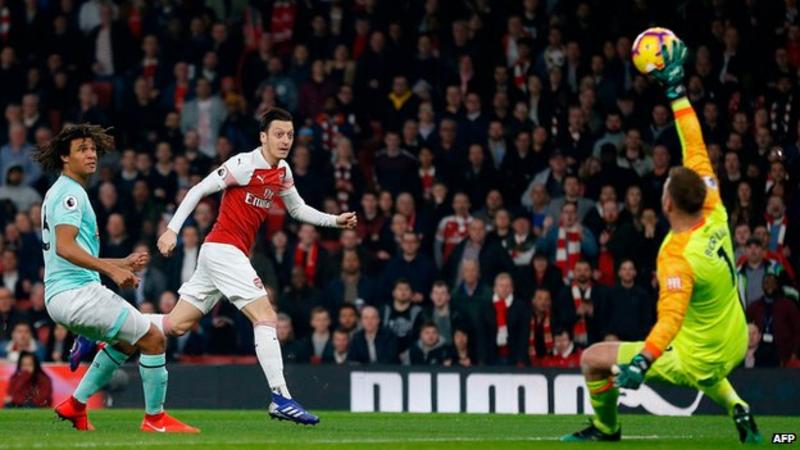 Super Eagles forward, Alex Iwobi played a sub role for Arsenal in their thumping victory over Bournemouth at the Emirates on Wednesday night.

The Gunners won 5-1 over their visitors to stay a point ahead of Manchester United in the Premier League table.

At Stamford Bridge, Chelsea defeated Tottenham 2-0, with goalkeeper Kepa Arrizabalaga absent, following his refusal to be substituted in the Blues’ last game at Wembley.

Pedro opened the scoring for the hosts before a late own goal by Kieran Trippier sealed the win for Chelsea.

At Anfield, Liverpool thrashed Watford 5-0, with Sadio Mane and Virgil van Dijk scoring a brace each while Divock Oriji scored a goal.

Elsewhere, Crystal Palace were beaten 1-3 at home by Manchester United.

Two goals by Romelu Lukaku and one by Ashley Young made Jeffrey Schlupp’s effort for Palace of less importance.

With the goals, Lukaku is now into the top 20 all-time Premier League goalscorers with 111 goals.

Manchester City defeated West Ham 1-0 at the Etihad, thanks to a Sergio Aguero penalty.

In another Premier League clash on Wednesday, Southampton beat Fulham 2-0.