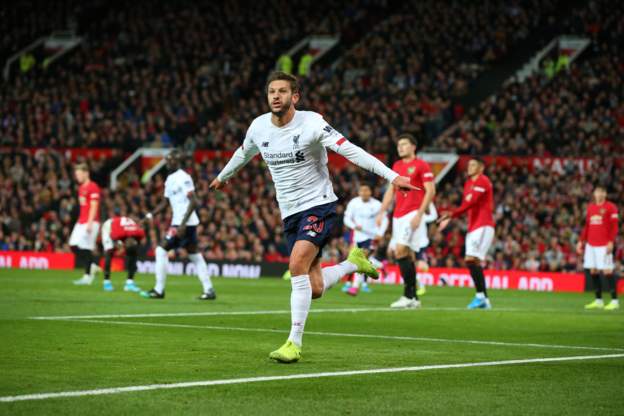 Liverpool put up a late fightback against Manchester United in the Premier League on Sunday, but could not maintain their perfect start to the season.

The league leaders, who were seeking a record-equaling 18th straight win in the Premier League, played a 1-1 draw against the Red Devils at Old Trafford.

With the draw, Jurgen Klopp’s side cut their lead at the top of the table to six points – above Manchester City, who beat Crystal Palace over the weekend.

It was Adam Lallana who rescued the late point for Liverpool after United had been in the lead since the 36th minute through a Marcus Rashford goal.

Rashford’s opener was contested by the visitors as they felt Victor Lindelof fouled Divock Origi in the build-up, but the VAR team decided the centre referee had not made an error in not giving a free-kick – and the goal stood.

The VAR again denied Liverpool when Sadio Mane thought he had equalised just before the break, but the video referee ruled he had handled the ball before scoring.

The Reds were well short of their best but substitute Lallana ran in behind Ashley Young in the 85th minute to convert Andrew Robertson’s cross and save their unbeaten record.

While Liverpool are dropping points for the first time since a draw with Everton in March, it is a sixth game without a win for United in all competitions, excluding penalties.