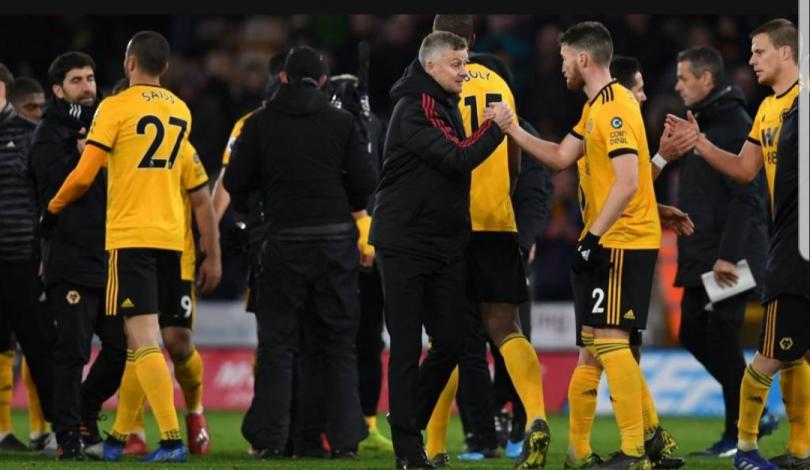 Manchester United were beaten by Wolves in the Premier on Tuesday night, with the Red Devils ending with ten men.

Wolves came from behind to win their visitors 2-1 in a thrilling encounter.

United missed the chance to move third in the Premier League as they threw away a 13th-minute lead courtesy of Scott McTominay’s low strike from 22 yards.

The hosts equalised on 25 minutes as Diogo Jota coolly finished from a Raul Jimenez pass to put both sides on level at half time.

Captain Ashley Young was then sent off in the 57th minute for two yellow-card offences after he twice fouled Jota inside a five-minute spell.

Wolves took advantage of their number as they won the game from an own goal by defender Chris Smalling in the 77th minute.

Read Also: FG yet to fulfill promise made to 1994 AFCON-winning Eagles -Eguavoen

United are level on points with fourth-placed Tottenham and two points behind Arsenal in third.

Elsewhere, Fulham were defeated by Watford and are now relegated from the Premier League.

They join Huddersfield Town to drop into the English Championship next season.

The Cottagers needed to avoid defeat to put off their inevitable demotion for another week, but were thrashed 4-1 by their hosts.

“We always knew it was a tough ask. It’s the way we lost the game which was most disappointing for me.

“The five or 10-minute spell from 2-1 onwards – if there was ever a watch then that was our season in a snapshot.

“We played some nice bits at times, but at the end of the day you are where you are – that 10 minutes.”