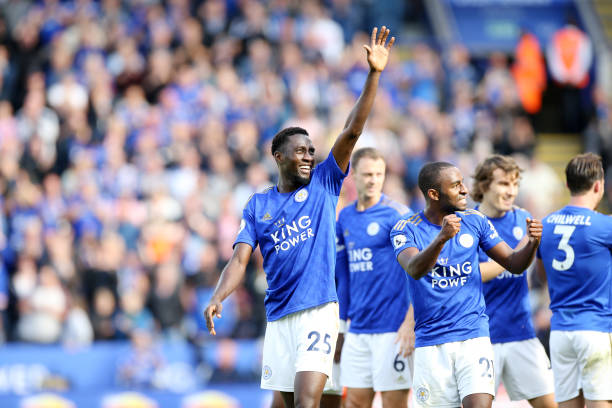 Super Eagles midfielder, Wilfred Ndidi returned to play for Leicester in the Premier League on Saturday after missing their last match due to injury.

Ndidi was on the pitch throughout the game, making notable tackles to help the Foxes win 3-1 over Bournemouth at the King Power Stadium.

Kelechi Iheanacho was absent for Leicester.

England striker, Jamie Vardy scored twice and was the catalyst for Youri Tielemans’ goal as Leicester maintained their unbeaten start to the season.

At Saint James Park, Nigeria’s Isaac Success played as a 71st-minute substitute for Watford in their 1-1 draw with Newcastle United.

It was Will Hughes’ early goal that helped the visitors secure their first Premier League point of the season, as a Fabian Schar equaliser denied them victory.

At the Etihad Stadium, champions Manchester City thrashed Brighton 4-0, with a double from Sergio Aguero and a goal each from Kevin de Bruyne and Bernardo Silva.

At Stamford Bridge, Tammy Abraham’s brace was not enough to hand Chelsea victory at home as Sheffield United held them to a 2-2 draw.

A late own goal by Kurt Zouma and an earlier second half goal by Robinson cancelled Abraham’s first half efforts.