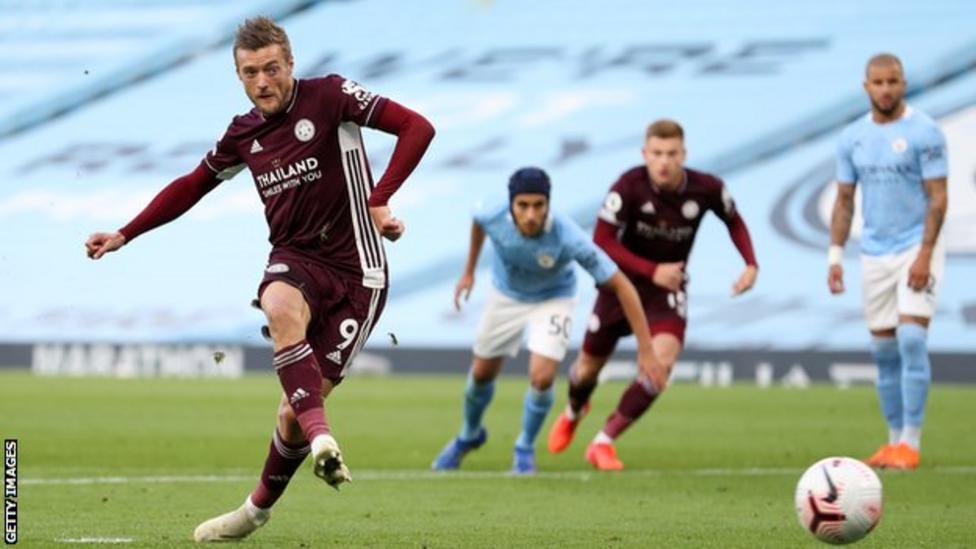 The game played at the Etihad Stadium saw a total of three penalties in favour of the Foxes, with hat-trick hero scoring from the spot twice.

Riyad Mahrez had put the hosts ahead after four minutes, before the Vardy equalized from the spot on 37 minutes after he had been fouled by Kyle Walker.

Vardy went on to score in the 54th and 58th minutes to complete his hat-trick before James Maddisonade it 4-1 against the Pep Guardiola side.

Nathan Ake gave City some hopes in the 85th minute, but Youri Tielemans scored from the spot to make iy 5-2.

Super Eagles midfielder Wilfred Ndidi was absent due to injury for Leicester, but his compatriot Kelechi Iheanacho was in action for only five minutes as he came in for Vardy on 85 minutes.

Earlier on Sunday, Tottenham Hotspur were held to a 1-1 draw by Newcastle United.

Callum Wilson’s late equaliser was Newcastle’s only shot on target, and it helped them earn a point having trailed since the 25th minute from Lucas Moura opener for Spurs.

In another Premier League game on Sunday, Leeds United won 1-0 over Sheffield United.

Buhari has put Nigeria on the path of greatness – Akeredolu