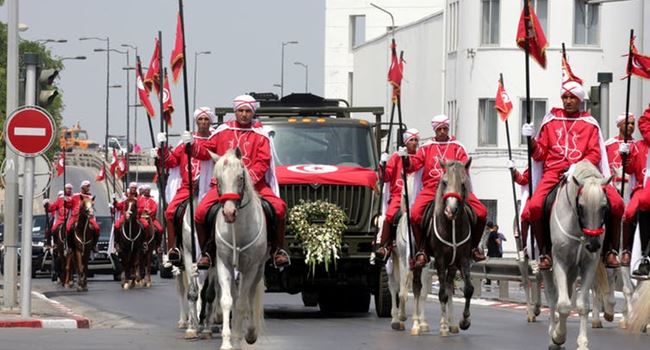 Tunisia has been popularly hailed as the only successful political transition to emerge from the wider Arab Spring movement. The culmination of this transition was the election of Mohamed Beji Caid Essebsi in 2014.

Essebsi’s victory would make history. He became the first president to be elected in a free and fair election in the nation’s history.

After strongman Zine el-Abidine Ben Ali stepped down in 2011, Essebsi’s tenure first as prime minister and later as president oversaw a strengthening of democratic institutions. This was hugely significant given that the region had a poor democratic record.

Following Essebsi’s death in July this year, politics has played out as observers had expected. His constitutional successor, Mohamed Ennaceur, has taken power on an interim basis. The presidential election, which had been set for October, has been brought forward to September 15. The survival of Tunisia’s democratic experiment, and particularly the reforms began by President Essebsi, will be determined by voters come September.

Essebsi helped to unite a fractious political environment. He was a secularist but strived to govern on behalf of all Tunisians. He also navigated a delicate coalition with the moderate Islamist political movement.

After Ben Ali’s removal there were continued complaints about the state of Tunisia’s democracy. In response, Essebsi founded the Individual Freedoms and Equality Committee in 2017. The Committee was tasked to identify laws that were unconstitutional and to suggest reforms.

Working with human rights and civil society organisations, the committee recommended major changes to laws that restricted gender equality. These particularly include equal rights to inheritance and the right to marry non-Muslims.

By the time of Essebsi’s death new inheritance laws were just about to come into force.

The former president also took steps to improve freedom of the press. According to annual assessments from Reporters Without Borders, Tunisia’s press freedom ranking rose from 164 out of 180 assessed countries to its current 72 during Essebsi’s tenure.

Essebsi’s tenure was, however, not without flaws.

Tunisia has struggled economically since 2014. The country also faces a serious security crisis in the form of a violent Jihadist insurgency.

Tourism, a cornerstone source of economic growth, has declined due to terrorism and environmental degradation.

The very reforms that earned Essebsi wide praise in the West often prompted a strong backlash from conservative elements in Tunisia. And despite giving the press more freedom, journalists and other Tunisians have continued to live under government surveillance. Their freedoms of expression are still restricted.

Essebsi has left behind an unfinished revolution that now lacks a champion. As a result, Tunisia’s political stability hangs in the balance. This is nothing new.
The death of leaders in fledgling democracies almost always results in democratic regression. Power-hungry individuals often take advantage of the leadership vacuum.

These dynamics have been prevalent in Africa for decades.

And in Algeria, former president Abdel Aziz Bouteflika’s health was constantly in question following a stroke in 2013. During protests in 2019, Army Chief Ahmad Gaid Salah declared publicly that President Bouteflika was unfit for office. He announced that the presidency was vacant. The Algerian military did not overtly attempt a coup but pressure from Salah ultimately forced Bouteflika out.

Political instability often results when leaders die or show weakness. It is hoped that Tunisia will transition in peace.

Essebsi did not design the institutions of the state to suit himself. And Tunisia does not have a heavily politicised military. It is unlikely that the military will try to take control of the country’s political processes. Since Ben Ali’s ouster there is a perception that

As such, there is no immediate threat
to the corporate interests of the armed forces. This is often a factor when armed forces make a play for political power.

Coherent succession rules are essential for preserving stability. Tunisia’s quick transition of power to the constitutionally-designated successor and the prompt scheduling of the presidential elections are positive signs. Rather than the death of Essebsi, it will be the outcome of the election that serves as a referendum on Tunisia’s future.

Voters have shown little faith in the current political parties, and there is a growing disenchantment with democracy. Thus, the election in September will no doubt be a test for Tunisia’s young democracy.

While the risk of military intervention and broader instability in the run-up to the poll is likely to be extremely low, it will be important to focus on post-election events. It is important that relations between the conservative religious parties and the secularist, progressive parties remain civil.

Even then, the rise of populist candidates and the relative decline in support for the mainstream Ennahdha and Nidaa Tounes parties may test the political norms created under Essebsi’s tenure.

It will be a long road to democratic stability. But Tunisia has bucked the trends observed in the region and Tunisians are up to the challenge of continuing to do so.