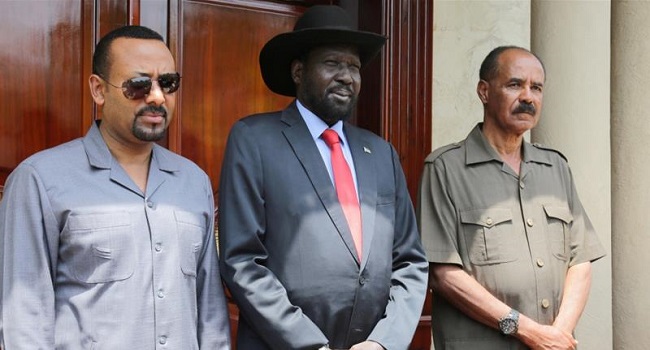 Leaders of Ethiopia and Eritrea on Monday paid a visit to the president of South Sudan, Salva Kiir in efforts to resuscitate a peace deal made last year between his government and rebels.

The deal which was said to have been falling apart was discussed by the leaders who sought to bring on board groups who rejected the deal signed in Ethiopia’s capital, Addis Ababa.

After a long and bloody struggle for independence, South Sudan broke away from Sudan in 2011 after which war broke out when Kiir accused his former deputy Riek Machar of scheming a coup.

About 400,000 people lost their lives and millions fled their homes and suffered starvation after the county’s split.

According to South Sudan’s Foreign Minister, Nhial Deng Nhial, rebel chief Thomas Cirillo and former-army-chief-turned-opposition figure Paul Malong who both rejected the September deal, will meet separately with ambassador Ismail Wais of the IGAD regional trade block who is monitoring the peace deal in Addis Ababa and Nairobi between March 8 and 10.

However, Eritrea and Ethiopia are still working on mending bonds dented by years of battle over their shared border and have established business investments in South Sudan’s hotel industry.