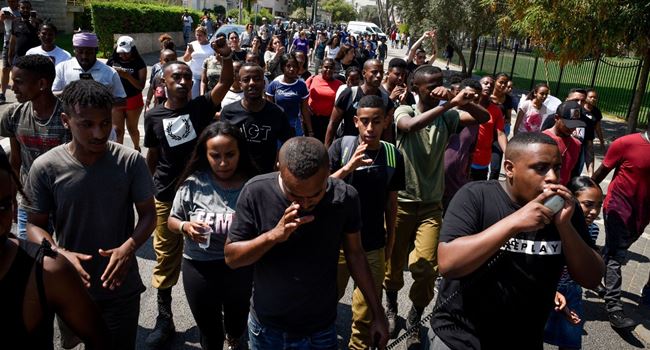 Dozens protested in front of a police station in Haifa on Tuesday morning after Solomon Tekah, an 18-year old Israeli-Ethiopian, was shot and killed by an off-duty police officer on Sunday night.

Al Jazeera learnt that crowds of Ethiopian Israelis battled police and blocked highways on at least 15 junctions across the country, with several officers wounded and demonstrators detained.

Thousands of motorists were stranded in huge traffic jams.

Following the incident, the police said it would allow freedom of expression according to the law, however, would act with determination against any kind of violence, including attempts to attack a police officer or civilians.

Teka’s death follows the police killing of Yehuda Biadga in January and many more, such as, the beating of Damas Pakada in 2015, tasering of Yosef Salamsa in 2014 which led him to commit suicide.

Prime Minister Benjamin Netanyahu issued a video late on Tuesday saying that everyone was mourning the tragic death of Solomon Teka.

While acknowledging there were problems that need to be solved, Netanyahu implored demonstrators to maintain peace.

ZAMFARA: Bandits storm peace meeting in Gusau, to deliver ‘their own message’ to Gov, Police