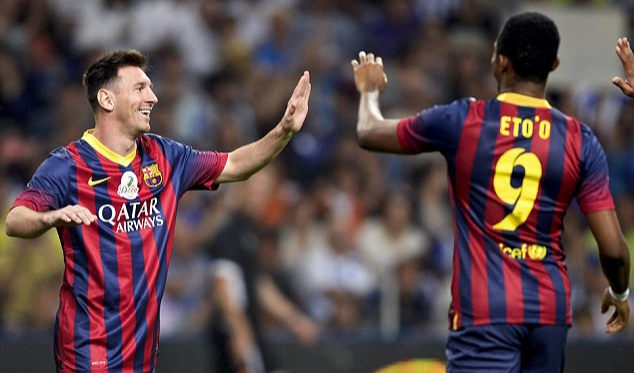 Former Nigeria international and a La Liga ambassador to Nigeria, Mutiu Adepoju has revealed plans of having Cameroon legend, Samuel Eto’o in Nigeria next month.

Adepoju, who spent most of his playing days in the Spanish bbn top-flight, said he could now confirm that Eto’o will watch the El Clasico with Nigerian fans.

“Samuel Eto will be in Nigeria next month for the El Clasico game,” said the 49-year-old, who amassed La Liga totals of 175 games and 22 goals over the course of seven seasons during his career.

“It is something we’ve been working on for a while now but I can now confirm to you that he will be in Nigeria and fans can get to see and meet him.”

Adepoju, who made this known to Punch on Sunday, also revealed that it is also in the works to bring Barcelona star and reigning world best footballer, Lionel Messi to Nigeria.

He admitted that it would be a great joy to have a player, who is regarded as one of the greatest of all time in the country, for fans to meet.

“We hope to have Lionel Messi come to Nigeria one day as part of the La Liga’s strategy to be closer to its fans here,” he said.

“It is possible to bring the Barcelona star to Nigeria for fans to meet him. We are not ruling that out and we will see what happens in the future.

“But everything also depends on his schedule but we are going to work hard and see what we can do to make it happen.”

The El Clasico – a La Liga match between Spanish giants Real Madrid and Barcelona – is billed to hold on Sunday, March 1.

Aregbesola & Banire’s brewing feud, pressure on Aminu Babangida to marry, knocks for Olamide’s new EP and all the scoops you don’t want to miss…