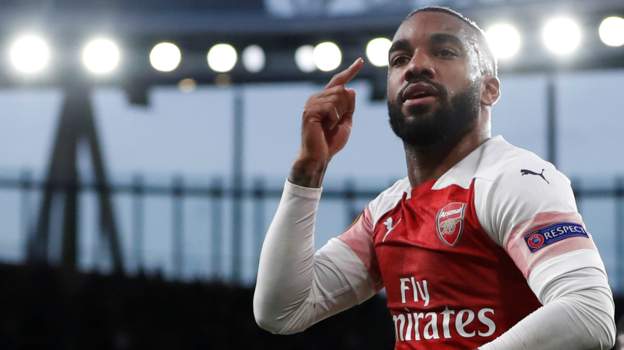 Alexandre Lacazette scored twice for Arsenal as they came from behind to seal a first-leg semi final victory against Valencia in the Europa League at the Emirates on Thursday.

The Gunners, who were trailing in the 11th minute following a Mouctar Diakhaby’s header, rallied back to win 3-1 against the La Liga giants.

Lacazette equaliser came in the 18th minute when the Frenchman slotted in Pierre-Emerick Aubameyang’s pass, and took his side to the front seven minutes later to make it 2-1 before half-time.

Aubameyang then added a late volley to ensure Arsenal take a two-goal lead ahead of the second leg in Spain next week.

In the other semifinal clash in Germany, Eintracht Frankfurt were held to a 1-1 draw by Chelsea.

The hosts took the lead through their top scorer Luka Jovic, who superbly steered in Filip Kostic’s ball in the 25th minute, but Pedro bagged an away goal for the Blues just before half-time.

The draw means that Chelsea become the first team to go 16 successive Europa League matches without defeat, breaking the record set by Atletico Madrid from 2011 to 2012.

They will have the chance to make it 17 in next Thursday’s second leg.