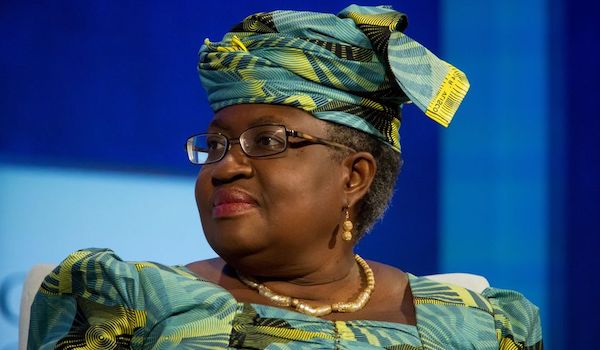 In a letter signed on Wednesday by the Co-chairs of the Parliamentary Conference on the WTO Steering Group, Bernd Lange and Sven Simon, the European Parliament said it screened the two remaining candidates for the WTO’s top job — Okonjo-Iweala and Yoo Myung-hee of South Korea — and was convinced that the Nigerian candidate has the “energy” and is “well-equipped” for the job.

The Parliament said it was satisfied with the Nigerian level of requirements and skills.

It urged the European Union to express support for the candidacy of the former World Bank director.

The letter read: “On 19 October, the EP’s Steering Group of the Parliamentary Conference on the World Trade Organisation organised exchanges of views with the two remaining candidates for the role of Director-General of the WTO.

“On this occasion, both candidates gave us an extensive account of their plans for the future of the organisation and the approach they would choose in order to deal with the crises that are currently threatening the multilateral trading system.

“Both candidates are extremely experienced, well qualified and knowledgeable, and have their own clear visions for the WTO’s future and priorities, and the Director-General’s role in shaping it, as well concerning the important role for parliamentarians in that future.

“During the discussions, we appreciated, in particular, the vision that Dr. Ngozi Okonjo-Iweala presented for tackling the substantial challenges the organisation is facing.

“Her assessment of the existing problems of the organisation revealed a deep understanding of the fault lines dividing the WTO’s membership.

“The points she set out for her first steps after being appointed to the position reveal a clear-eyed agenda, tackling head-on key topics such as special and differential treatment, industrial subsidies, and dispute settlement reform while recognising the need for positive momentum through the conclusion of agreements on issues such as fisheries, e-commerce, and health.

“We also appreciated the energy with which she is likely to approach her new role. It appears to us that her personal approach is what is needed now to resolve the key questions at the organisation.”