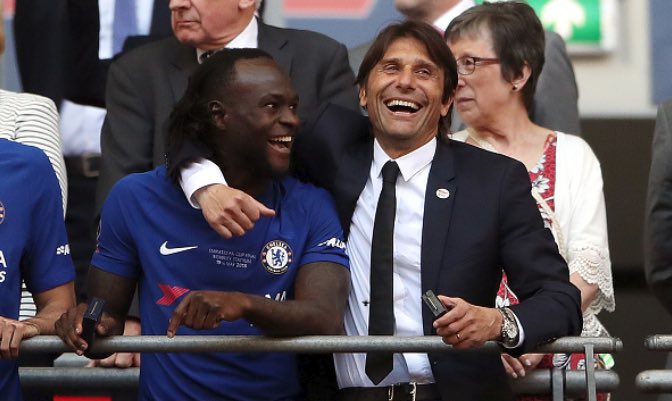 A former manager at Chelsea, Antonio Conte is set to be appointed manager at Serie A giants, Inter Milan, ahead of the coming season.

According to reports also, the Italian may reunite with former Nigeria international, Victor Moses, who has been linked with a move to the club.

Conte, 49, has been out of the game since last July when he was sacked by the Blues after a two-year spell at Stamford Bridge.

Inter are fourth in Serie A and will qualify for next season’s Champions League if they beat Empoli in their final league game of the season on Sunday.

It is understood by reports that the current coach, Luciano Spalletti will be replaced as the season comes to an end.

Meanwhile, Moses, currently on loan at Fenerbahce, is being rumoured to reunite with his former coach at Chelsea. The report linked the Nigerian alongside Manchester United’s Romelu Lukaku with the move this summer.

Conte won the Premier League title in his first season at Stamford Bridge and the FA Cup in his second, with Moses in the picture in both triumphs.

The coach also won three titles in his three-year stay at Juventus before spending two years in charge of the Italian national team.