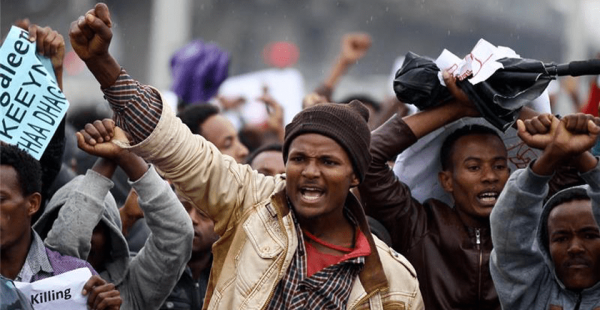 Twenty four-hours after the abrupt resignation of Prime Minister, Hailemariam, wild protests by Ethiopia’s Oromo and Amhara people – who make up about 61 percent of the country’s population have forced authorities in the country to declare a state of emergency.

The declaration which came into effect as of Friday, but was not immediately clear how long it would last was announced by the Council of Ministers which comprises the Ethiopian government’s cabinet.

Quoting an unnamed source “close to the government”, the Addis Standard newspaper reported that the Council was debating whether to make the measure span three or six months.

However, Jawar Mohammed, an Oromo rights activist and head of the Oromia Media Network, said the state of emergency declaration was “unnecessary, unhelpful and unwise”.

“The best way to ensure stability at this time is not to declare state of emergency that was tested and failed,” Mohammed wrote on Facebook earlier on Friday.

Moments after throwing in the towel, Hailemariam, who has sat at the helm of the Ethiopian government since 2012, cited ongoing “unrest and a political crisis” in the country as major factors in his resignation, which he described as “vital in the bid to carry out reforms that would lead to sustainable peace and democracy”.

13 Russians, 3 firms charged with election meddling by US authorities