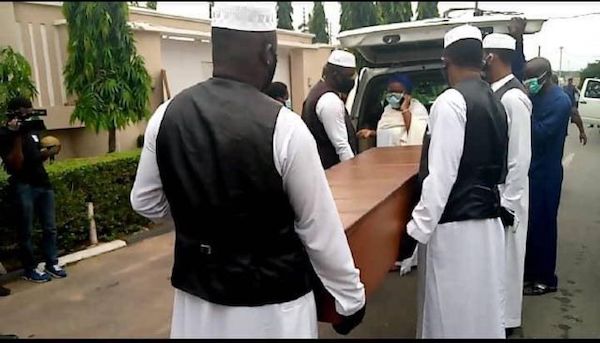 The remains of Senator Abiola Ajimobi, a former Oyo State governor, have been laid to rest in Ibadan.

The late senator was buried on Sunday at his residence at 6th Avenue, Yemoja Street, Oluyole Estate in Ibadan, the Oyo State capital according to Islamic rites.

The family of the politician had wanted him buried at Agodi GRA, but the state government refused to give its approval to that.

The Seyi Makinde led government explained that it did not approve the request by Ajimobi’s family because there was litigation on the property they requested to bury the former governor on.

Ajimobi’s death was announced last week Thursday, after he died at a hospital in Lagos owing to complications from the dreaded COVID-19 pandemic.

He was buried in compliance with the COVID-19 protocols with no more than 20 people.

His wife and other members of his immediate family were in attendance during the burial ceremony that had fierce looking armed policemen, who were strategically positioned, ensured that party members and followers of the former Oyo State leader were barred from the burial site.