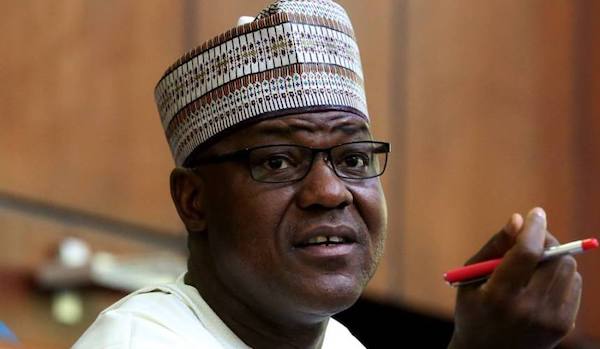 Former Speaker of the House of Representatives, Yakubu Dogara, has formally joined the opposition Peoples Democratic Party (PDP) from the ruling All Progressives Congress (APC).

The confirmation was made at the PDP presidential campaign held in Lagos on Monday.

The former House of Representatives speaker had in 2020 joined the All Progressives Congress (APC) after spending few years in the major opposition party.

His latest departure from the ruling party was influenced by its Muslim-Muslim ticket. And though still a member of the APC, Dogara, along with other Christian leaders from the north had endorsed the presidential candidate of the PDP, and he was later appointed as a member of the PDP Presidential Campaign committee.

The APC Muslim-Muslim ticket, the Forum of Christian and Muslim Political Leaders from the 19 Northern states and the Federal Capital Territory (FCT) had on Friday adopted atiku as the consensus candidate for next year’s election.

The forum, which took the decision at the end of a meeting of the leaders and delegates from the North held at the Atiku Abubakar Hall of Shehu Musa Yar’Adua Centre in Abuja, noted that Atiku/Okowa ticket addresses all the concerns of inclusiveness, fairness, and national cohesion.

“The All progressives Congress (APC) as we all know has fielded the same faith (Muslim-Muslim) ticket which excludes a large demography of Christians who do not feel represented by the ticket. The APC presidential ticket does not promote inclusiveness, unity, religious harmony, and cohesion. A large population of Muslims have also expressed reservations to this ticket and have called for fairness and inclusivity.”

‘My record is consistent in school,’ Tinubu opens up on background at Chatham House

A bedwetter should not join those insulting the washerman, Lai Mohammed responds to ex-VP’s criticisms