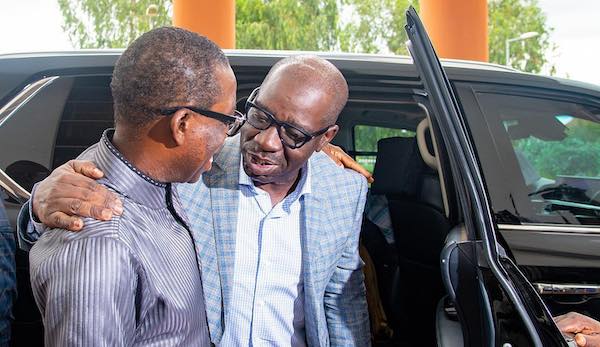 Delta State Governor, Ifeanyi Okowa, has met with chieftains of the Peoples Democratic Party (PDP) in Edo State to broker peace over rumblings within the party’s ranks following the defection of Governor Godwin Obaseki to the party, Ripples Nigeria can confirm.

Speaking with Ripples Nigeria on the meeting, our source, who spoke on condition of anonymity, said Governor Okowa led his host, Governor Godwin Obaseki, to meet with Chief Dan Orbih and other party chieftains.

He said: “I can confirm to you that Governor Okowa has met with chieftains of the PDP in Edo State. They met in the Benin residence of Chief Dan Orbih, a foremost party leader and former chairman of Edo chapter of PDP.”

Speaking on the purpose of the meeting, our source said “the meeting is to calm frayed nerves and foster harmony among party members. There have been some rumblings within the party since Governor Godwin Obaseki’s defection.

“Governor Okowa, being a party man to the core and a strategic thinker, understands the grievances of Edo PDP leaders and members who have sacrificed a lot to build the party. He knows these grievances are legitimate and wants to ensure everyone is carried along”.

Today’s meeting confirms earlier reporting by Ripples Nigeria that the party in the state had been rocked by the coming of Obaseki, threatening the cohesion it had so far enjoyed.

Following Obaseki’s defection from the All Progressives Congress (APC) to the PDP and his being granted a waiver to contest on the platform of the party, there has been disaffection over the decision to accept him by chieftains and members of the party in the state who feel sidelined and disrespected by the national leadership.

Governorship aspirants, state party leaders and members of the party have been speaking out about what they termed an imposition by the national leadership of the party, warning of great danger should Obaseki be favoured over party loyalists.

Reacting to Obaseki’s defection, Kenneth Imasuangbon, one of the PDP governorship aspirants, publicly rejected any move to grant automatic ticket to Obaseki as being rumoured, or to make other aspirants step down for him. Imasuagbon also warned against handing the party’s ticket to Obaseki, describing him as a failure.

Speaking with newsmen, he said: “It (Obaseki’s government) is a failed administration because he has not delivered on his promises.

“He promised 200,000 jobs but he has not been able to deliver them. Schools and hospitals are dilapidated.

“There are security concerns everywhere. The roads are still bad and some members of the House of Assembly have not been inaugurated”.

On moves to get him to step down, he said: “The contemplation of me stepping down is preposterous. You can’t ask me to step down after my (political) struggle for the past 16 years.

“Why? How do I explain that to the people who laboured for me in the past 16 years? Even in the dream, I can’t have such a thought.

“Nobody should reach out to me. That is of no value to me. There is no advantage to him (Obaseki).

“Let there not be intimidation or any form of manipulation of the process by the leadership of the party at the national level.”

His position appears consistent with reports of the position of other PDP governorship aspirants in the state. They appear to be firing off a warning signal that any attempt to further grant special treatment to Obaseki would destroy the cohesion and good fortunes of the PDP in Edo. It appears clear that the public declaration of this position is to make sure the party’s national leadership which has been leading the process to absorb Obaseki fully into the party is aware of the dangers of such a move. Many in the state chapter have expressed their dismay at being left out of the process. They accuse the national leadership of adopting a top-bottom approach which they say is tantamount to an imposition.

It is not only the aspirants and party leaders that have been signalling a possible showdown over Obaseki. The supporters have also been speaking. Supporters of the party who say they have stood solidly behind the party all these years, and rejected Obaseki in the past, say they also worry that their support may have been taken for granted. They warn that the party risked disaster should their support be lost.

Following the granting of a waiver to Obaseki and his deputy, Phllip Shaibu, the youth and women wing of the PDP, Edo chapter, Saturday came out strongly against the waiver.

Speaking on behalf of the youths under the auspices of PDP Youths for Justice, the coordinator, Musa Kadiri, in a statement, warned the party leadership not to mistreat loyal party members by giving special treatment to Obaseki.

He argued that the party’s three aspirants -Ken Imasuagbon, Gideon Ikhine and Omoregie Ogbeide-Ihama –were capable of defeating any candidate the APC presented.

Kadiri said, “We, the youths on ground in Edo know that the PDP has positioned itself to win the forthcoming gubernatorial election. We do not need Obaseki who is chased out of the APC based on questionable credentials”.

She said the election provided another opportunity to reward those that had been loyal to the party for the over 12 years that the party had been in opposition in the state.

Some party stalwarts argue that imposing Obaseki was a recipe for disaster as it was neither sustainable nor just . They say their sacrifices and interests must not be discarded. They ask the national leadership of the party not to forget that despite federal might backing the APC, the PDP was able to win two out of three senatorial seats and four House of Representatives seats. They also reminded their party leadership that the PDP had only narrowly lost out to the APC in the governorship election contested by Obaseki which they say was fraught with irregularities.

Other party stalwarts and members recalled how the party in the state was able to record these victories and stay relevant despite great odds owing to the strong leadership and sacrifices of Chief Dan Orbih, who as chairman, they say led the party as one united formidable force. They warned that Chief Orbih and his team had laboured to build a strong party in the state that must now not be destroyed by the imposition of Obaseki.

To some staunch party members, their main worry over the Obaseki matter revolves around his certificate issues for which he was disqualified by the APC. They reminded their party leadership that it was not a new issue, as in 2016, the PDP had raised similar issues and even instituted a lawsuit against Obaseki over the matter. They argue that Obaseki’s certificate issue was a legal disaster waiting to happen, citing the APC’s tragedy in Bayelsa where its governorship victory was invalidated by the courts over discrepancies in the certificates of the running mate.

Ripples Nigeria also gathered that for some party members, there is palpable fear that Obaseki may be difficult to work with. When Obaseki said “I am now the leader of the PDP in Edo State” during his announcement of his defection, it was seen as disrespectful to long-standing leaders of the party in the state by some members. They are asking the national leadership of the party to be wary of Obaseki’s penchant for disloyalty, arguing that if he could betray the APC which gave him the governorship, he could do the same to the PDP.

Details of the meeting were yet to be made public as at the time of filing this story.