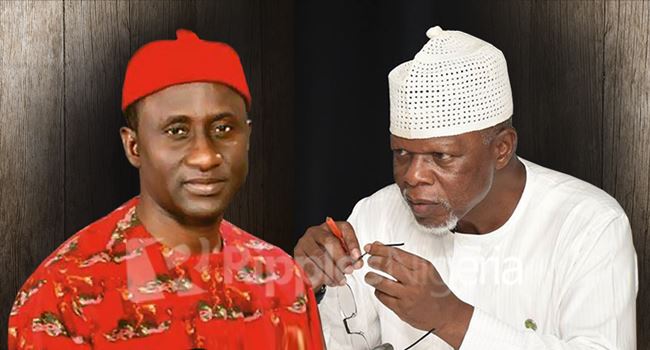 In what seems to be a brewing scandal between the Minister of State for Mines and Steel Development, Uche Ogah, and the Comptroller General of the Nigeria Customs Service, Hameed Ali, over 34 containers of expired rice seized at the Tin Can port in Lagos, a former vice president of the Nigerian Bar Association (NBA) and official spokesperson for Masters Energy Group, Monday Ubani, has said that there was no truth in the claims made by the Nigerian Customs.

“There is no single truth in what Col Ahmed Ali was trying to make the whole world to believe in the said press conference,” Ubani said.

On Tuesday, the Customs boss had announced that the service intercepted 34 containers of expired rice smuggled in through the port from China and Thailand.

Masters Energy Group, a conglomerate with over 15 subsidiaries and interest across a variety of industries – including the oil and gas sector – is owned by the Minister of State for Mines and Steel Development, Uche Ogah.

According to Ubani, the supposed containers of rice were imported in 2016 by Masters Energy Commodity Trading Limited – a subsidiary of Master Energy Group – through the Tin Can Island Port.

He alleged that the containers of rice were impounded by the Nigerian Customs Service (NCS) for failure to pay the correct tariffs when clearing them by the Customs Licensed Agent.

Ubani further claimed that Masters Energy Commodity Trading Limited petitioned the House of Representative’s Committee on Customs, Excise, and Tariff that its clearing agent Messrs Destiny Impex Limited made a false declaration in order to cut tariff for the 30 containers of rice.

Destiny Impex Limited had falsely declared the content of the containers as yeast in August 2016 to pay a duty of 5 percent instead of the 70 percent duty and levy which led to the Customs impounding them. If the clearing agent had succeeded, it could have cost the government N75 million for the 14,000 bags of rice in the containers.

According to Ubani, when the company expressed its willingness to pay the correct tariff, their request was turned down because the containers of rice had allegedly been distributed to internally displaced people (IDP) in the North. His claim suggests Masters Energy Commodity Trading Limited may have imported the containers of rice at a time when there was an existing ban on the importation of rice and 40 other food items by the Central Bank of Nigeria (CBN).

It is believed that Masters Energy could not have imported this volume of rice, without approaching the CBN’s Investors’ and Exporters’ FX Window, which invariably meant the CBN may have sanctioned the transaction. The apex bank had in July 2015, in a bid to sustain the stability of the foreign exchange market and ensure efficient utilization of foreign exchange, released a list of 41 items – including rice – that will not receive forex for importation, and were banned.

The Masters Energy Group, therefore, wonders “why was it convenient for the Comptroller General to withhold the date of the said interception?”

“What point was the Comptroller General wants to achieve by this emergency press briefing in 2019 over a seizure that was done since 2016 and already in the news? Is it to prove to the gullible Nigerians that Nigerian Customs Service that is under ‘heavy fire’ for its excesses is really working and saving Nigeria’s economy?

“What was also intended to be achieved by saying that the rice has expired or about to expire when it failed to disclose when the seizure was done and whether the life span of rice was supposed to be forever?

“Why the Comptroller General wasted such quantity of rice that should have been donated to the Internally Displaced People in Nigeria who are dying of hunger every day?”

Findings show that parboiled rice has no definite shelf life. A research by Lorraine Coons et al from Chestnut Hill College titled ‘Quality of Regular and Parboiled Rice in Long-Term Storage’ confirmed that parboiled rice can be stored for up to 30 years.

While these questions beg for answers, the concern of many is whether the minister, an All Progressives Congress (APC) candidate in the 2015 Abia state gubernatorial election, tried to use his political influence to gain unfair advantage in the ‘expired rice’ saga.