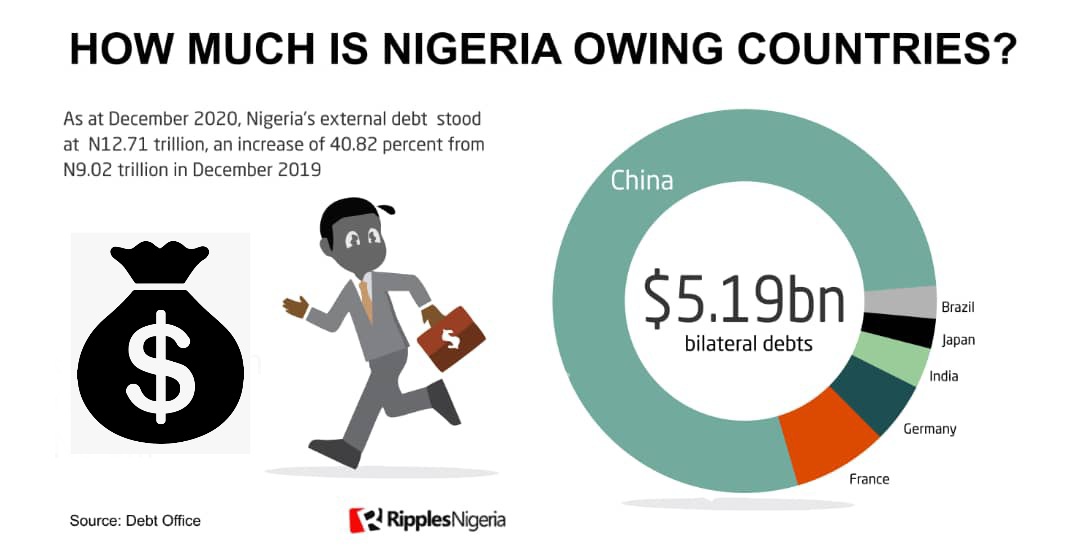 On Wednesday, the senate gave a go-ahead to the Federal government to borrow another $1.5 billion and 995 million euros from World Bank, the Export-Import Bank of Brazil, and Deutsche Bank.

The new loans which are about N1 trillion in naira terms will bring Nigeria’s total external public debts to over N13 trillion.

How is the external loan sourced?

The multilateral category is external debt burden to international financial institutions (IFIs) such as the International Monetary Fund (IMF) and the World Bank.

A breakdown from the Debt Management Office shows that as at December 2020, Nigeria owed $17.93 billion to the international financial institution.

A bilateral debt represents money borrowed from other countries. DMO data show that debts of this kind currently stand at $4.06 billion as of December 2021.

Furthermore, $11.17 billion is recorded in the commercial category which have Eurobonds and Diaspora Bonds and $186.70 billion in Promissory notes.

The countries Nigeria is indebted to

As of December, DMO reveals that Nigeria borrowed from China through Exim Bank of China, France through its Agence Francaise Development.

Others are Japan through Japan International Cooperation Agency, and India (Exim Bank of India) and Germany (Kreditanstalt Fur Wiederaufbua).

The new entrant is Brazil, through its Export-Import Bank.

Disaggregation of the debt

80.4 percent of Nigeria’s debt to countries is from China which stands at $3.26 billion.
China is followed by $493.71 million borrowed from France and $184.32 million from Germany.

Others are $80.20 million borrowed from Japan and $37 million from India.
The latest €995 million loans will be from Brazil and Germany which is about $1.2 billion.

What is the new loan for?

The newly approved loans from Brazil and Germany, the federal government said, will be used to ensure food security in the country.

In a post on its Twitter handle, the Federal government explained “Today, the Nigerian Senate, approved the President’s request for approval of €995 million in loans from the Export-Import Bank of Brazil (BNDES) & Deutsche Bank of Germany (and guaranteed by the Islamic Development Bank) for the Green Imperative Agricultural Mechanisation program.

Paying back the debts

Although loans under the bilateral agreement are relatively cheaper than other categories of loans, nevertheless the country is spending more compared to the previous year to service these debts.

Any cause for concern?

While Borrowing allows governments to cover shortfalls in revenue, it comes at a cost, especially in a situation where the value of Naira on daily basis is depreciating against the dollar.

This burden is made clear when the accumulated debt is calulated per citizen, that is, if each Nigerian is ready to pay for the debts.

Although very unfashionable, compared to debt to GDP or debt to revenue, debt per capita provides a clear context for a layman.

A former Governor of the Central Bank of Nigeria (CBN), Mallam Sanusi Lamido Sanusi has described this as very worrisome.

In his words: “It is no cheering news that the external debt profile to total revenue grew from eight per cent in 2011 to over 400 per cent in year 2020, more worrisome is the components of bilateral loans, of which China is a major player, with $3.2 billion of Nigeria’s $4.1 bilateral debt.”

“Honestly, I think debt relief is very necessary if this country is going to have the fiscal space to pursue any kind of developmental objectives. We can’t be spending 90 or 100 per cent of our revenue on debt service and don’t have anything to invest in development”, he added.

Related Topics:#featuredbrazilChinaNigeria’s debts
Up Next