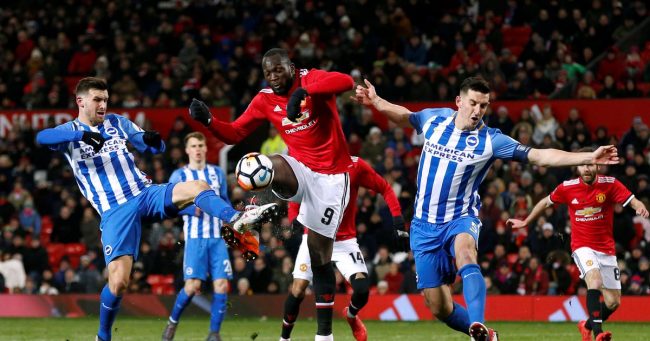 Manchester United have sealed their place in the semifinal of the English FA Cup after easing past Brighton and Hove Albion 2-0 in a last eight encounter at Old Trafford on Saturday night.

Romelu Lukaku headed in a 37th-minute cross from Nemanja Matic to put the Red Devils ahead.

Brighton could not convert their several chances in the second half to force extra-time before Matic sealed victory by nodding in Ashley Young’s free-kick seven minutes to full time.

The win means United retain hopes of a trophy this season after they crashed out of the UEFA Champions League with a defeat to Sevilla last Tuesday.

They also maintain their record of not having conceded a goal in this season’s FA Cup.

Earlier on Saturday, Tottenham also qualified for the semifinal after beating Swansea City 3-0 at the Liberty Stadium.

Christian Eriksen scored twice, in addition to Erik Lamela’s strike, to help his side reach the last four for a second successive season.

Eriksen opened the scoring just 11 minutes into the game and Lamela doubled their lead before half time.

Son Heung-min’s effort was ruled out for offside after consultation with the Video Assistant Referee (VAR) before the break.

But a second of the day for Eriksen on 61 minutes set Spurs out of reach of their hosts as they chase a ninth FA Cup triumph.

Tottenham are seeking a first trophy since they won the League Cup in 2008.

Meanwhile, Chelsea will play at Leicester City on Sunday, while Southampton will play at Wigan in the other quarterfinal games.