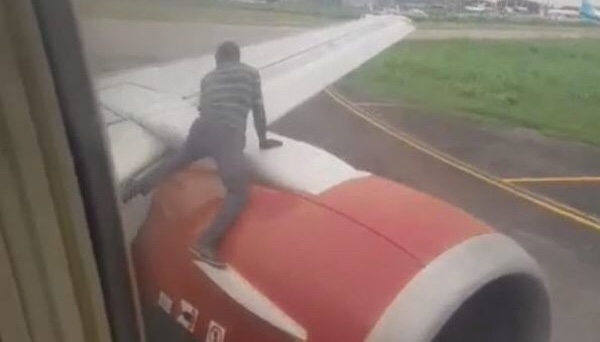 The Federal Airports Authority of Nigeria (FAAN) has revealed that the man who climbed on an Azman aircraft ready for take-off at the Murtala Muhammed International Airport (MMIA) on Friday, is citizen of Niger Republic.

Yadudu also said that Adamu was first arrested on Sunday night around 10 pm within the airport vicinity by its Aviation Security (AVSEC) personnel, but was released a few hours later.

According to him, FAAN has launched a thorough investigation which warranted the suspension of four staff, with a view to ascertaining the remote and immediate causes of the security breach, adding that, “With regards to the identified suspect, investigation is ongoing to ascertain his intent, be it criminal or not and his mental/psychological state.”

Briefing reporters, Yadudu said the suspect who “claimed to be residing at No 1 Araromi Street, Iyana Ipaja, on the 19th July, 2019 was reported to have appeared at the domestic end of the taxi way and attempted to gain access to the aircraft, while it was taxing to the holding point.”

“The pilot alerted the air traffic control and the message was intercepted by the Aviation Security control monitoring centre who mobilized the patrol teams to the incident. He was apprehended, detained and is currently with the Airport Police Command, as our investigation progresses.”

The FAAN Managing Director, however, admitted that, “the FAAN authority considers this incident a serious security breach and an Airside incursion. This is unfortunate and most embarrassing bearing in mind the huge effort and resources dedicated to the maintenance of the integrity of Airside and Airport safety.

“We do understand that the security wheel is ever revolving with new and emerging threats daily and we have been working with all our stakeholders and the regulatory agency (NCAA) in addressing our living security challenges.”

The FAAN boss recalled that the same suspect had been arrested before in the same airport, pointing out that, “the patrol security team arrested the same suspect on the night of Sunday the 14th of July 2019 within the Airport premises.”

He added that, “his profile pictures were taken and he was subsequently evacuated out of the Airport to a very far location in accordance with our standard procedure. We are now reviewing this procedure in the light of this incident.”

Yadudu noted that, “at the conclusion of this investigation, all officers who are found negligent in the discharge of their assigned duties shall be held fully accountable.”

Yadudu said FAAN assures the travelling public that security measures would be scaled up at the airports across the country so as to forestall future occurrence.