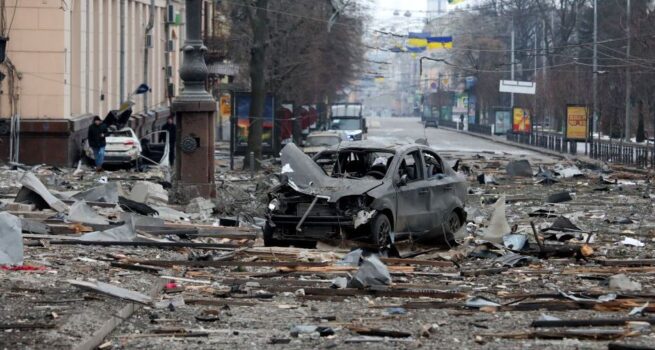 Since the invasion of Ukraine by Russian forces on February 24, 2022, the internet has been awash with distorted and misleading videos on the matter, with intent to spread disinformation. Many news readers and social media users seldom attempt to confirm the veracity of the claims in these videos before sharing them. This has further intensified the spread of misinformation and disinformation in the cyber space, as even some unsuspecting mainstream media outlets sometimes fall prey.

Ripples Nigeria identifies the most viral videos on the Ukraine-Russia war which have been distorted or are accompanied by misleading claims.

1. Did Putin declare war on Nigeria or any African country?

Some African countries had expressed their views on the crisis, including Nigeria, and Kenya, but none has expressly condemned Russia for invading Ukraine. Recently, a video was circulated on social media of Putin delivering a speech in Russian language. Different versions of the same video shared on whatsapp and Facebook are accompanied by varying English subtitles. According to the subtitles, Putin threatened African leaders who comment on the invasion of Ukraine by Russia.

A version of the video has the following as its subtitle: “First, let me make myself clear to African leaders about Ukraine. What Russia does to Ukraine is none of your business. Instead of tweeting about Russia and Ukraine, why don’t you solve your continent’s problems. If I should read anything about Russia from any African leader, I will immediately nuke that country. I will start with Nigeria tonight.”

In another version, “Nigeria” was changed to “Kenya”.

Another subtitle to the same video reads, “Putin warns Nigerian military to desist from sending untrained troops to Ukraine, unless we will level the whole Nation starting from Lagos. Last warning for President Buhari.”

Checks of screenshots of the video showed that the viral clip was cut from a TV address by Putin on February 24 in which he announced his decision to invade Ukraine.

In the full transcription of the video on Bloomberg, there is no mention of Nigeria, nor Kenya, nor Africa. Instead, Putin was justifying his military aggression against Ukraine, on the premise that the North Atlantic Treaty Organization (NATO), led by the United States and the United Kingdom disregard international laws by attempting to expand Eastward to admit Ukraine into the organization.

Putin accused the US of deception and blackmail, highlighting instances where Uncle Sam’s country invaded sovereign nations unprovoked, like Lybia, Iraq, and Afghanistan.

He never threatened to nuke any African country for condemning or making a comment on his decision to send military forces to Ukraine.

Ripples Nigeria conducted a frame-by-frame verification check on the video USING InVID and traced it back to 2011.

It is a video of US forces in collaboration with the Afghan National Army (ANA) fighting the Taliban in the Kandahar province of Afghanistan, in December 2011.

It is only being recycled by fake news mongers to make people believe it is related to the war ongoing in Ukraine.

3. Individual tug of war between Russian and Ukrainian soldiers?

A Facebook user shared a video of two soldiers engaged in a bout where a rope is tied to their waists and they drag themselves in an exhibition of strength, while other soldiers cheered them.

The video as shared by the Facebook user carried the caption: “One on one tug of war, Russia Vs. Ukraine”

Ripples Nigeria conducted a reverse image search on the screenshots of the video and found its earliest version on the YouTube page of ‘31CanadianBrigade’. The original video has the caption: “One on one soldier Tug of War, Canada vs USA”. It was posted nine years ago, precisely on March 21, 2012.

Another misleading video on the Russia-Ukraine war is that which claims that an eight-year-old Ukrainian girl confronted a Russian soldier, asking the latter to leave her country.

Ripples Nigeria already conducted a check on the video and found that it is an old video shot in 2012 during the occupation of Palestine land by Israeli soldiers. The girl, who is now an activist, is a Palestinian who confronted an Israeli soldier when she was 8-years-old.

Here is a link to the report, in case you missed it.

FACT CHECK: Are these bandits on Nigerian highway as claimed in viral video?