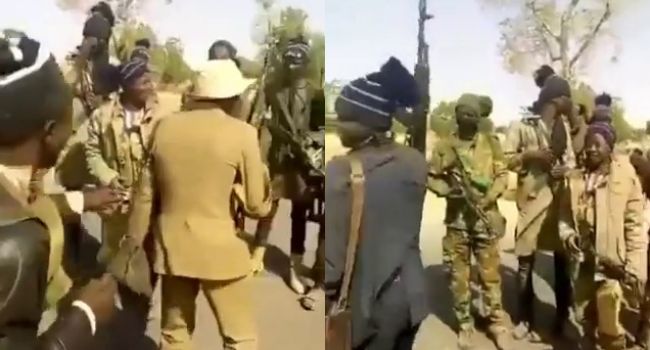 A video circulating on social media purportedly shows a group of bandits on a Nigerian highway.

A twitter user @panter_wakanda, posted a video on Monday of a group of men wielding guns on a highway, presumably sacking motorists from the road. The poster claimed that the gun-wielding men in the video were bandits – armed gangs perpetuating violent crimes including kidnapping, mass killing, and cattle rustling in Northwest Nigeria.

The last time Ripples Nigeria checked the post, it had 243 retweets, and 271 likes.

However, some tweeps in the comment section of the post expressed skepticism about the veracity of the claim. Some even argued that the video could not have been shot in Nigeria.

A tweep, @GodNetfix insinuated that the video was shot in Donbass, a region in Southeastern Ukraine. He added that the video may have been posted for ‘clout’, an informal term for “seeking attention on social media”

He wrote, “Research about the donbas fighting for Kremlin… you should know Twitter posts anything for clout”

The video was posted on Tuesday, a day after terrorists attacked a train in the Dutse village of Kaduna state, killing at least eight people, and kidnapping a yet to be verified number of passengers.

Ripples Nigeria did a frame by frame analysis of the video using InVid, a video verification tool, and a reversed image search of the results. This led us to the first version of the video on YouTube. It was posted by 9ja24TV on January 11, 2022, with the caption: “yan-yazu yadda yan fashin daji suka mamaye titin Abuja zuwa kaduna (yaran Bello turji zamfara)” which may be translated thus: “How bandits took over Abuja-Kaduna express just now (Bello Turji’s boys)”.

Meanwhile, a researcher, who has lived over two decades in the Northwest, Abubakar Sadiq confirms that the video was shot in Nigeria, but not the Abuja-Kaduna expressway.

“Their dressing and style of cap, and even their footwears gave them away as Nigerian Fulanis. This is Zamfara to Sokoto road. The Abuja-Kaduna highway is double lane.”

Sadiq who had worked with journalists and humanitarian aid workers as a fixer, stressed that various gang groups in the Northwest have different territories, and Bello Turji, a notorious leader of one of the bandit groups in Zamfara state, could not have had his gang take over the Abuja-Kaduna highway.

“This is definitely in Nigeria. But you know Bello Turji operates between Zamfara and Katsina states. That is his territory.”

He added that the men in the video were speaking Hausa; while the songs played in the video are also in Hausa language.

The men in the video mentioned that they were “Jihadists”, and called one another’s name. Two names heard in the video are Awalu, which is the Hausa version of the Arabic name ‘Awal’, and Sanusi, another Arabic name.

It is established that the video was shot in Nigeria, and the men in the video are bandits terrorizing the Northwest region of the country. However, sources disagree that it was shot on the Abuja-Kaduna expressway. Sadiq and two residents who are acquainted with roads in the region agree that the road in the video is between Zamfara and Sokoto states.

Related Topics:#featuredBanditsNigerian highway
Up Next