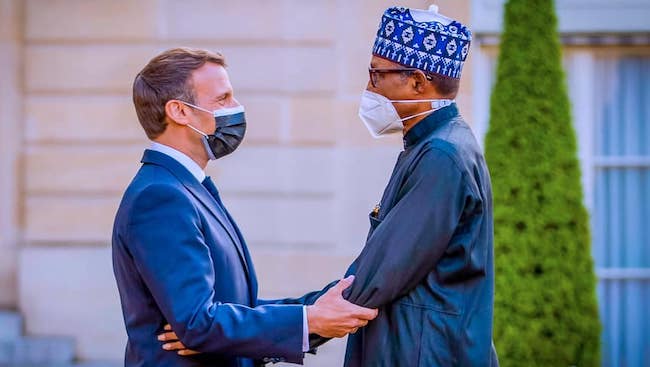 Claim: Buhari Attends a Postponed Conference in Paris (Adetutu Balogun via Twitter, May 16, 2021)

From Sunday evening after the departure of President Muhammadu Buhari to Paris for a France-Africa summit as announced by his media aide, Femi Adesina, different social media personalities have been second guessing the president’s move.

One of such tweets that made the burst was a response from Adetutu Balogun to Bashir Ahmad’s Tweet with picture of a news piece showing the event had been postponed and a caption “Your boss didn’t get a memo.”

The same screenshot tweeted by Reno Omokri with the caption “Yet, @MBuhari has already landed in Paris. And this man is meant to be the leader of 200 million Nigerians…” has generated over 500 retweets and one thousand likes.

Reno Omokri who describes himself to his over 900 thousands followers as Buhari tormentor has also threatened to harras Buhari out of Paris, tweeting;

“If the Africa-France Summit was postponed, due to #COVID19, and @MBuhari was informed, why did he still travel to Paris? I remind Buhari that Nigeria is drifting. If he does not drift back to Abuja to halt the drift, I might be forced to drift to Paris to #HarassBuhariOutofParis!”

France 24 reported on May 16, 2021 that the French President, Emmanuel Macron will be hosting African leaders and global financial institutions chiefs for a twin meeting in seeking support for the Sudanese government under Prime Minister, Abdalla Hamdok  and rallying African economies on closing the gap of 300 billion shortfall caused by COVID-19 pandemic.

The screenshot referenced belongs to All Africa News, an agency that aggregates all News stories concerning Africa from multiple platforms.

The News was published on May 14, two days prior to President Muhammadu Buhari’s departure and was referenced back to RFI, a french news radio station stating that the reason Montpellier town hall postponed the event from 8 – 10 July to 7 – 9 October 2021 was to allow the Presidential Palace prepare adequately for it considering the COVID-19 travel restrictions.

Conclusion: The claim of Adetutu, and by extension, Omokri is false. The postponed conference was initially scheduled for July and will be happening in Montpellier, about 600 kilometres from the French capital city, while the summit President Buhari went for which is a special one to discuss supporting the democratic government of Sudan and Post COVID-19 financial situation is currently holding in Paris, the France capital.