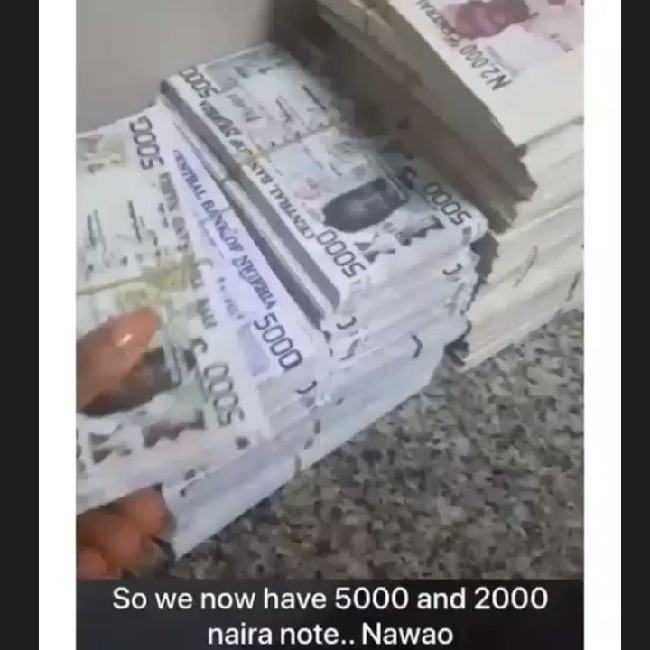 CLAIM: A video is circulating on Social media, particularly Twitter, showing bundles of money purported to be new naira notes of N5,000 and N2,000 denominations.

Recently, the Central Bank of Nigeria announced that it has redesigned some of the naira notes, including N100, N200, N500, and N1000.

The CBN governor, Godwin Emefiele, who announced the plan at a press briefing on Wednesday, stated that the new notes will start circulating by December 15 2022.

“Although global best practice is for central banks to redesign, produce and circulate new local legal tender every 5–8 years, the Naira has not been redesigned in the last 20 years.

“On the basis of these trends, problems, and facts, and in line with Sections 19, Subsections a and b of the CBN Act 2007, the Management of the CBN sought and obtained the approval of President Muhammadu Buhari to redesign, produce, and circulate new series of banknotes at N100, N200, N500, and N1,000 levels,” he said.

Following the announcement, a claim began to spread on social media that the apex bank had resolved to introduce new denominations for the naira, which are N2,000 and N5,000.

The voice in the video says: “This man came here today to deposit this money in my branch. And he claims he is a madman. He said it is 18 million but we counted 17 million”

Ripples Nigeria found that the video is old. It was first posted on the internet in January 2020, almost three years ago.

While announcing the CBN’s plan to redesign naira notes, Emefiele did not add that the bank would be introducing an additional denomination.

Meanwhile, it should be noted that the Central bank in 2012, under Sanusi Lamido Sanusi, attempted to introduce the N5000 denomination and convert N10, N20 and N50 to coins, but the Nigerian populace kicked against it, and the plan was shelved.

The viral video showing purported new naira denominations is an old one and only resurfaced after the CBN announced plans to redesign naira notes of existing denominations. The CBN has not introduced new denominations.

FACT CHECK: Is this a crowd of Atiku’s supporters in Bauchi as claimed by PDP?