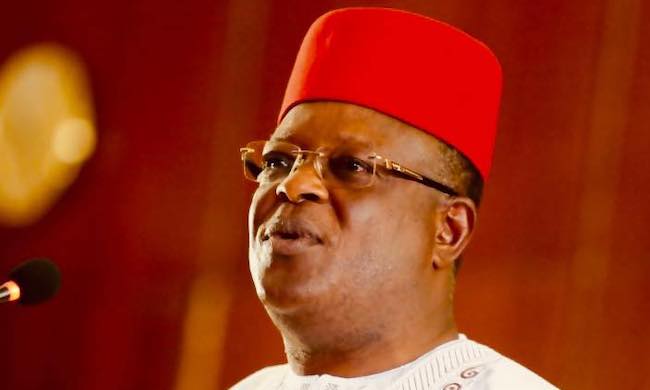 CLAIM: A 2-minute video has gone viral on social media showing military men in uniform flogging some civilians in Ebonyi State, allegedly under the supervision of the State Governor, Dave Umahi. However, in a statement by his aide, he claimed that the video was doctored.

VERDICT: False. The video was not doctored.

Soldiers attached to the Governor of Ebonyi State, Dave Umahi were caught in a viral video beating civilians. It is not clear if the governor was the man in white polo and face cap supervising the flogging. However, his official car was caught in the video.

The video was shared on Twitter by @ChidiOdinkalu. He wrote: “So, today in Ebonyi, @GovDaveUmahi went for a project inspection & then instructs the soldiers to flog – yes flog! – civil servants who arrived late. Not done, Dave Umahi supervised the flogging. Tomorrow, he’ll be rewarded with seat in @NGRSenate”.

The video was shared by multiple media houses. It has also caused a stir on Twitter, with many tweeps criticizing the governor.

However, in a swift reaction, the State Governor issued a statement describing the video as “doctored”. The statement signed by the Commissioner for Information and State Orientation, Orji Uchenna Orji, was titled: “DISREGARD TRENDING DOCTORED VIDEO CONNECTING SECURITY ATTACHED TO EBONYI STATE GOVERNOR WITH PURPORTED FLOGGING OF CIVIL SERVANTS AT GOVERNMENT HOUSE, ABAKALIKI”.

He argued further that some miscreants blocked the airport gate in order to stop construction and possibly embarrass the governor who was there to inspect the progress of work on the site.

He insinuated that those flogged were the alleged miscreants.

Read also: FACT-CHECK: Is Angolan currency stronger than naira, dollar as claimed by a Twitter user?

Part of the statement read: “We wish to inform members of the public that the purported footage is a video manipulation of an aborted attempt by miscreants to block the Airport gate and inflict fear on those working at the on going International Airport and possibly embarrass the Governor who was on a routine inspection visit to the Airport project, in guise that they were enforcing sit-at home- order at the premises of the Airport on Tuesday, 4th October, 2022.

“It would be recalled that miscreants had in the past tried to attack those working at the Airport site and their plots were neutralized.

“Contrary to the fake report that the incident happened at the gate of the Government House in Abakaliki while the Governor was on supervision, the miscreants were dispelled at the gate of the new Airport under construction. It is to be noted that no Civil Servants or employees whatsoever have been recruited to work in the Airport and so no Civil Servant was flogged at the Airport gate, contrary to impression in the trending report. We are therefore surprised at the basis of the unintelligent fabrications of the mischief makers.

Ripples Nigeria could not independently confirm the location where the video was shot. It is also not established whether those flogged in the video were civil servants or construction workers or ‘miscreants’ as the government described them. There was no proof from both the government and the tweep who posted the video.

However, Ripples Nigeria conducted forensic checks on the video and did not find any trace that it was doctored as claimed in the government’s statement.

The state government in its statement did not deny that governor Umahi supervised the assault by the soldiers. Instead, it tried to justify the act by labelling the assaulted folks as ‘miscreants’.

Meanwhile, whether they were civil servants, construction workers or ‘miscreants’, neither the governor nor the soldiers had the right to pronounce punishments on civilians without a fair trial.

The claim by the Ebonyi State government that the video was doctored is false.

FACT-CHECK: Did soldiers in uniform join Obi-dient rally in Lagos?