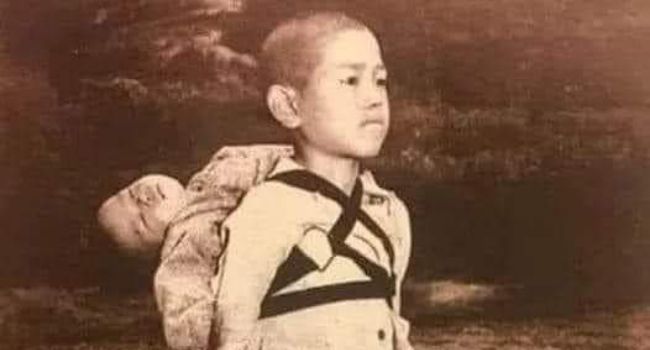 One of such posts reads:

“In Japan, during the war, this boy was carrying his dead brother on his back to bury him. A soldier noticed him and asked him to throw this dead child so that he would not get tired. He replied:

He’s not heavy, he’s my brother!
The soldier understood and broke down in tears.
Since then, this image has become a symbol of unity in Japan.
Let this be our motto:
“He’s not heavy. He’s my brother… She’s my sister.”
If he falls, raise him.
Even if you get tired, help him,
And if his support is weak,
And if he makes a mistake, forgive him
And if the world abandons him, carry him on your back, because he is not heavy
he is your brother…”

A reversed image search of the picture led to different accounts of the same story – The story of the boy standing by the crematorium after the atomic bombing of Nagasaki by the US.

The picture became popular on the internet after it was reportedly shared by Pope Francis on December 30, 2017. According to international media, which published it on January 1st, 2018, the picture was attached to a postcard by the Head of the Catholic Church, titled ‘The Fruit of War’. The post card carries a short message in French and signed by the Pope himself. It is translated thus: “The young boy’s sadness is expressed only in his gesture of biting his lips which are oozing blood.”

The Catholic News (CNS) reported, “As 2017 was drawing to a close, the horrors of war and people’s yearnings for peace were on Pope Francis’ mind and in his prayers.

“In an unusual move late Dec. 30, the Pope had the Vatican press office and Vatican media distribute a copy of a famous photograph from the aftermath of the atomic bombing of Nagasaki.”

The Pope intended to promote the importance of peace and caution world leaders against war.

The Picture as published by Catholic News carried the following caption: “This 1945 photo taken after the atomic bombing in Nagasaki, Japan, was released Dec. 30 by Pope Francis. The photo by U.S. Marine Joseph Roger O’Donnell shows a boy carrying his dead brother on his back as he waits for his brother’s turn to be cremated. (CNS photo/Joseph Roger O’Donnell via Holy See Press Office) See POPE-NAGASAKI-WAR Jan. 1, 2018.”

THE STORY BEHIND THE PICTURE

Towards the end of the second World War (1939 – 1945), the United States, backed by the Allied Forces deployed nuclear weapons in its bid to force Japan to surrender.

A nuclear bomb, named ‘Little Boy’ was dropped in Hiroshima on August 6, 1945, killing 70,000 people instantly, while the death toll surpassed 100,000 by the end of the year. Three days after, on August 9, another nuclear bomb, ‘Fat man’ was detonated on the city of Nagasaki killing an estimated 40,000 people, while another 30,000 succumbed to injuries and radiation poisoning by the end of the year. Over 200,000 Japanese were killed by the atomic bombs and 2/3 of both cities destroyed.

The bombing of the Hiroshima and Nagasaki marked the first use of atomic weapons in the history of warfare. Some historians and the US, in particular, justified the action on the premise that it forced the Japanese government to surrender and marked the end of World War II.

Following the atomic bombings of Hiroshima and Nagasaki in Japan, 23-year-old US Marine photographer, Joe O’Donnell was sent to document the aftermath and effects of the bomb in the two cities. He reportedly spent about four years on the assignment

The picture is one of those shot by O’Donnell. It captures a boy carrying his dead brother on his shoulders while he waits for his turn at the crematory.

The earliest version of the picture on the internet was found in an article by the Las Vegas Review Journal published on August 6, 2007. The article titled: “Dad’s Images of Death” contained the Journals’ interview with O’Donnell’s son, Tyge O’Donnell.

“He told me that the boy dropped his brother off at a crematory and watched him burn,” O’Donnell said. “The boy bit his lip so hard it bled. My dad said he wanted to comfort the boy, but he was afraid if he did they would both break down”, Tyge was quoted in the journal.

The senior O’Donnell who would later become a White House Photographer died on August 9, 2007, due to complications he suffered from a stroke.

FACT CHECK: Did Pope Francis cancel the Bible, propose a new one?