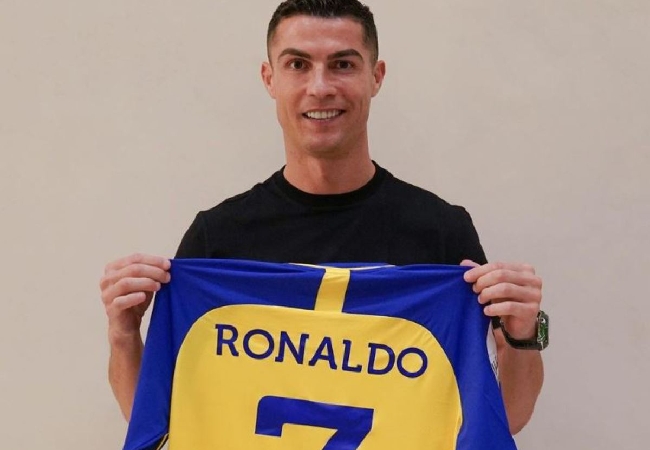 CLAIM: It is being circulated by different social media users that a player with the Saudi Arabia Pro League Champions, Al-Nassr got his contract terminated for refusing to give up his number 7 shirt for Christiano Ronaldo who signed with the club on New Year’s Eve.

Following his premature exit from Manchester United, 5-time Ballon D’or winner, Christiano Ronaldo has signed a three-year contract with the Saudi Arabia League side, Al-Nassr. The deal which will see him earn €200 million per annum makes him the highest paid player in the world.

The Portuguese star was unveiled last Friday with his favorite number 7 jersey.

Speculations linking him to the Saudi team had been on since November when the World Cup started. This was shortly after he was unceremoniously divorced by Manchester United.

Meanwhile, it is being circulated on Facebook and Twitter that a player, whose picture was paired with Ronaldo’s in the posts, had his contract terminated because he would not give up his number 7 jersey for one of the World best players.

The player in question was identified as Jaloliddin Masharipov. The Uzbek forward, who joined the club in 2021 has scored two goals and made five assists.

Ripples Nigeria found that he is still at the club. Although he might have given up the number 7 jersey for Ronaldo as he suddenly switched from 7 to 77 at the beginning of the 2022/2023 season in August.

Before changing his shirt number, he had been linked to joining another club but he came out to announce that he would be staying at Al-Nassr for another season.

Amidst speculations around November that Masharipov picking a new shirt was an indication that the club was interested in signing Ronaldo, the club’s president, Musalli Al Muammar, dismissed it as just a coincidence.

Explaining to SSC Sports, he said: “People always like to talk about everything even when it comes to a player’s number on a training ground. I asked the management about the incident, and their response was that he [Masharipov] was on his way to Al Ahly in the summer and his shirt number [No.7] was reserved for another player. But the deal did not take place in the end so Masharipov occupied a new number instead.”

Masharipov might have given up his shirt for Ronaldo, his contract was not terminated as It is being circulated.