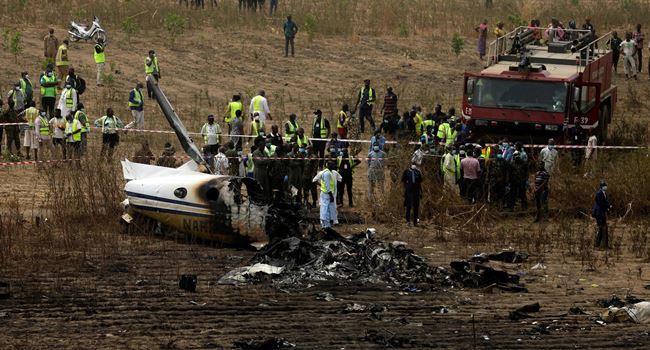 Viral video showing remains of the plane crash that killed the Chief of Army Staff (COAS) claims there were survivors from the incident.

Less than 24 hours after the death of the Chief of Army Staff (COAS) Late Lt. Gen. Ibrahim Attahiru, a video was shared across WhatsApp platforms showing a crashed plane and some civilians surrounding the scene talking about it.

Nairaland, a popular forum for Nigerian youth with high ranking on search engines came up with the newsfeed of how two people jumped out of the plane before it came crashing, making reference to the video trending on WhatsApp.

The video was traced to voice TV youtube channel. The video was uploaded on September 28, 2018, with the caption; Breaking: Full video of Nigeria Air Force JET Crash in Abuja.

The full video shows how civilians rushed to the venue of the accident and airforce men asking people to step back. A voice was heard in the video narrating what happened.

A Video of that incident was also published by Vanguard newspapers on the same day and a comprehensive report of how two aircraft crashed in Abuja while rehearsing for Independence Day anniversary celebration. It was later confirmed in the day that a pilot died from the crash.

Also, no newspaper has reported that there was any survivor in the plane crash carrying the chief of Army staff in Kaduna

The video is a resurfacing one of an airforce jet that crashed in Mpape Area of the Federal Capital Territory, Abuja while rehearsing for Independence day celebration in 2018.  Also, while the man talking to the camera claimed people jumped from the plane, the media confirmed one pilot died as a result of that crash.

Jonathan’s failure to honour agreement cause of insecurity —Northern group