FACT CHECK... What was the identity of individual killed in Ebonyi explosion? | Ripples Nigeria 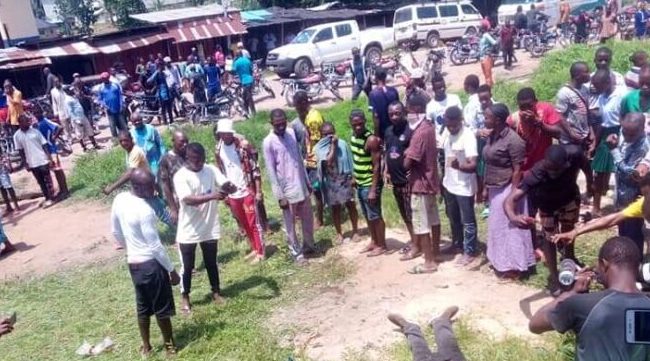 A video shared around on WhatsApp showed people gathered around a mutilated corpse covered in blood, and a voice behind the camera describing the situation said: “This is Afikpo North Local Government Area of Ebonyi state. A suicide bomber amongst Hausa-Fulani suicide bomber was killed by the bomb he hanged on his waist this morning..”

The video has gone viral via WhatsApp and many newspapers have published same story as well.

While all traces of the video shows it was shot and uploaded on the internet today, 25th May, 2021, the  special adviser to the Ebonyi state governor on media and publicity, Francis Nwaze has debunked the claim made in the video.

In the statement signed by Mr Nwaze, he confirmed the news that someone was killed by a grenade but that the person was not a suicide bomber, but rather a security personnel.

READ ALSO: Suicide bomber blows self up in Ebonyi

In his words; “The above news is in sharp contrast to the reality as the incident was a grenade of a security personnel carrying out his duties at the said location that accidentally exploded.”

In a similar vein, the Nigeria police force also debunked the story. While corroborating Mr Nwaze, loveth Odah, police spokesperson in Ebonyi said the victim was a mobile police officer.

“He mistakenly hit the lead of his grenade which was hanging on his waist with his elbow resulting in the deadly explosion,” Ms Odah said.

Conclusion: Going by the statement from the state government and the police, a security personnel was the one killed and not a suicide bomber. However, both authorities are yet to explain what a police personnel was doing with a grenade, as this is not a standard issue for the force.