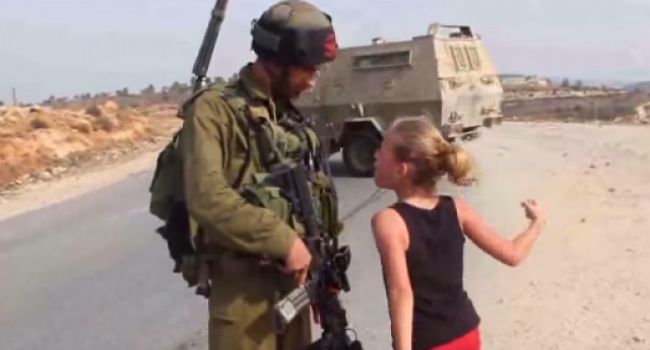 A video that has now gone viral on the internet is accompanied with the claim that an eight-year-old Ukrainian girl confronted a Russian soldier, asking the latter to leave her country.

False. It is an old video shot in 2012 during the occupation of Palestine land by Israeli soldiers.

Many people also shared the video on Whatsapp groups.

Reversed Image searches and video verifications by Ripples Nigeria showed that the circulated video was shot in 2012. It is the video of Palestinian Ahed Tamimi, who is celebrated by Palestinians for her bravery in the attempted resistance of Israeli occupation of West Bank, a landlocked territory near the Mediterranean coast of Western Asia, which is widely populated and claimed by Palestinians. The land is however occupied by Israeli soldiers

In 2012, Ahed reportedly gained fame among Palestinian activists for an incident in which she led a group of children, including her younger brother, in arguing with Israeli soldiers. In a video of the incident found on YouTube, she is seen repeatedly raising her fist at a soldier, and attempting to hit him. The video has the description: “Brave Palestinian girl Ahed Tamimi vs Soldier : Where is my brother ??????” Ahed at the time was 11 years old.

Read also: FACT CHECK: Has Nigeria witnessed only one major fuel scarcity under Buhari as claimed by Femi Adesina?

One of the pictures found through reverse image search carried the following caption: “Ahed Tamimi, sister of the boy whose attempted arrest by an Israeli soldier led to a West Bank scuffle on August 28, faces a soldier in 2012”

Meanwhile, that was not the only video of Ahed Tamimi, who resided, with her parents and cousin in Nabi Saleh, a Palestinian village in the West Bank. She was also filmed on December 15, 2017, slapping a soldier of the Israeli Defense Force at the entrance of her house, while her mother recorded; she was arrested alongside her mother and her cousin on December 19; and legal proceedings were instituted against the three of them. At the time of her arrest, she was 16 years old.

Ahed, Nariman Tamimi (her mother), and Ahed’s 21-year-old cousin, Nour were each charged with aggravated assault of soldiers.

A military court judge ordered the release of Nour on January 5, 2018 saying that the charges against the 21-year-old were fewer and less severe. However, Ahed and Nariman remained imprisoned. Ahed was indicted for aggravated assault and preventing soldiers from carrying out their duties.

In January, 2018, a military court judge ordered that 16-year-old Ahed and her mother remain behind bars until the end of legal proceedings against them.

In one of such proceedings, the Military court Judge, Haim Balilti, reportedly said of young Tamimi: “The intensity of her violence establishes a clear rationale for danger and indicates that her actions stem from the promotion of an ideological goal.”

Ahed served 8 months in an Israeli Prison before she was released in July 2018.

FACT CHECK: Has Nigeria witnessed only one major fuel scarcity under Buhari as claimed by Femi Adesina?