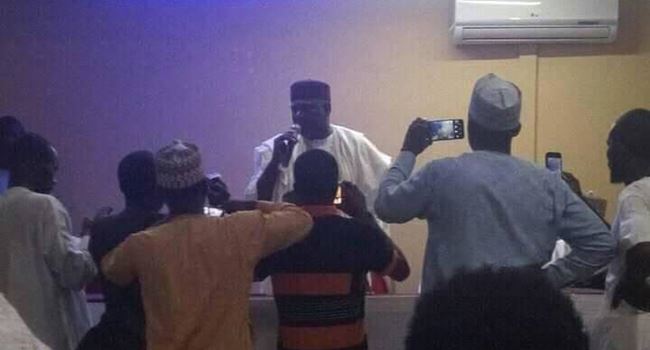 There was palpable tension among members of the ruling All Progressives Congress (APC) in Bauchi State as the state congress was shrouded in secrecy and cover up just as another faction believed to be loyal to the Nigeria Ambassador to Germany, Yusuf Maitama Tuggar held a parallel congress at Zaranda Hotel where a new set of executive members emerged .

Heavily armed security personnel took besieged the Next Level main party Secretariat along Maiduguri road, and had to use tear gas to disperse a group of political thugs who attempted to disrupt proceedings.

A source however confided in our Correspondent that the leadership of the party was meeting with stakeholders on the way forward behind closed doors due to some knotty issues that must be carefully handled in order not to plunge the party into another round of crisis.

Feelers have it that Minister of Education, Adamu Adamu who is the leader of the party in the state as the most senior political appointee since the party does not have a serving Governor is insisting that his anointed candidate, one Babayo Aliyu Misau becomes the next party Chairman while the Yakubu Dogara led faction is against the move.

The development did not going down well with many members owing to what they said was the fact that the person had never been an active member of the party in the state.

Another faction of the party, led by the immediate past Governor, Mohammed Abdullahi is routing for the incumbent Caretaker chairman, Uba Nana to continue but faces stiff opposition from those who are of the opinion that he was part of the problem that led to the defeat of the party in the 2019 gubernatorial election.

Earlier, the members had rejected a candidate brought forward by the former Speaker of the House of Reps, Yakubu Dogara in the person of Sen Hamma Misau an indication that the party is again heading towards another crisis as was the situation before the 2019 General elections.

All efforts by Journalists to get a hint of the happenings behind the closed door proved abortive as one of the outgoing officials who spoke simply said, “what we are doing is top secret of the party, as soon as we are done, we will let you know what we want you to know”.

While addressing Journalists at the Next Level Secretariat of the APC, State Congress /Electoral Committee Chairman, Jibrin Sam assured that his committee will be free to all contestants for the offices in accordance with the rules and regulations of the party.

He explained that the two options of conducting the election will apply where necessary saying that consensus will be used based on agreement of the stakeholders while proper balloting will be used where consensus fails.

Jibrin Sam stressed that his committee will be diligent in the conduct of the congress saying, “we are not in a hurry to go, we will ensure that all processes were completed before we leave. By Monday, every aspect of the exercise must have been concluded and we will brief you on the outcome”.

Related Topics:APCBauchiBauchi APC
Up Next

SERAP commences lawsuit against Buhari over plans to monitor WhatsApp