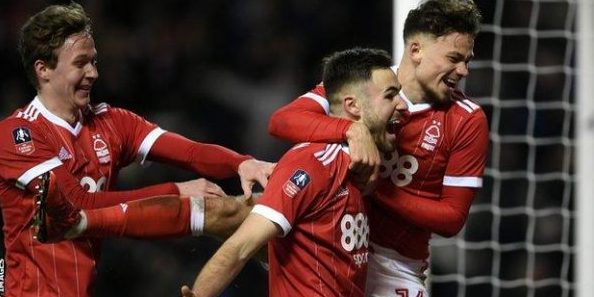 English FA Cup holders Arsenal were condemned to an FA Cup third-round exit after a shock defeat to managerless Championship side Nottingham Forest on Sunday.

Forest took the lead when Eric Lichaj headed in the opener 20 minutes into the game before Per Mertesacker levelled for Arsenal three minutes after.

Lichaj reclaimed the lead before half-time with a spectacular dipping volley from the edge of the area.

Forest pulled further clear in the second half when Ben Brereton sent David Ospina the wrong way from the penalty spot, but Danny Welbeck reduced the deficit 10 minutes to time.

But Kieran Dowell’s 85th-minute penalty rounded the game off as Forest won 4-2 to hand Arsenal their first FA Cup third-round defeat since January 1996.

Arsenal boss, Arsene Wenger watched the tie from the stands as he served the first of a three-match touchline ban handed down by the Football Association for misconduct.

At Wembley, Tottenham thrashed AFC Wimbledon 3-0 to advance to the fourth round of the competition.

In the other FA Cup games, West Ham drew goalless at Strewsbury as Leeds United were beaten 2-1 at Newport County.